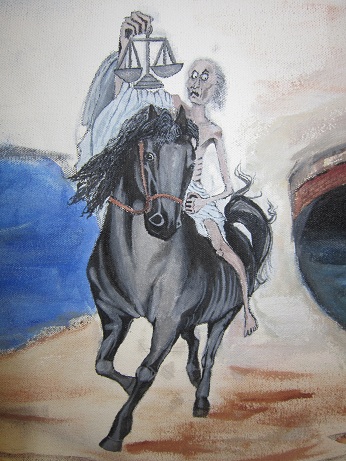 “And when he had opened the third seal, I heard the third beast say, Come and see. And I beheld, and lo a black horse; and he that sat on him had a pair of balances in his hand. And I heard a voice in the midst of the four beasts say, A measure of wheat for a penny, and three measures of barley for a penny; and see thou hurt not the oil and the wine.” ~ Revelation 6:5-6

The famine aspect is alluded to because only a daily portion of food is being weighed in the scale for the price of a man’s daily wage, meaning he is barely being kept alive during this famine of food. In ancient times a man’s daily wage would typically by eight to ten times this amount of food!

It is the third living creature (of the four) that is introducing this black horse and its rider. The third minister beast, or living creature, had the face of a man. So the ministry most associated with this time of the black horse rider is that which has the weaknesses of a man’s wisdom and abilities. The famine caused during this time is not by natural causes, but rather it is the inhumanity of man that causes this through the minimal measure of gospel food for a day’s wages. Without the Holy Spirit directing, it is man’s selfish, weak, and self-seeking wisdom that prevails, for the scripture plainly teaches us:

In ancient times, balances or scales were for measuring out fair exchanges when they were used rightly.

The warning of this “black horse” revelation is that ministers need to take heed to their potential for a corrupt balance in their ministration. They still have the potential of falling to the weaknesses of seeking the favor of the men who can make them personally prosper. Therefore they must exercise self-control and be watchful and keep integrity in their judgments.

Because of this inherent weakness that exists with man, he must stay humbly reliant upon God for success. Without staying close to God, a minister will fail! If man becomes corrupt in his judgement, seeking the favor of man, he is like one planted in a desert place where there is famine.

“Thus saith the LORD; Cursed be the man that trusteth in man, and maketh flesh his arm, and whose heart departeth from the LORD. For he shall be like the heath in the desert, and shall not see when good cometh; but shall inhabit the parched places in the wilderness, in a salt land and not inhabited. Blessed is the man that trusteth in the LORD, and whose hope the LORD is. For he shall be as a tree planted by the waters, and that spreadeth out her roots by the river, and shall not see when heat cometh, but her leaf shall be green; and shall not be careful in the year of drought, neither shall cease from yielding fruit. The heart is deceitful above all things, and desperately wicked: who can know it? I the LORD search the heart, I try the reins, even to give every man according to his ways, and according to the fruit of his doings.” ~ Jeremiah 17:5-10

Again, in latter part of the scripture concerning the black horse rider we read:

“And I heard a voice in the midst of the four beasts say, A measure of wheat for a penny, and three measures of barley for a penny; and see thou hurt not the oil and the wine.” ~ Revelation 6:6

Again, remember that in ancient times, a penny (equivalent to a day’s wages) would typically buy eight to ten times this amount of food. So truly this is like a time of famine because of the high price for the food. But also remember that this is all spiritually speaking:

“Behold, the days come, saith the Lord God , that I will send a famine in the land, not a famine of bread, nor a thirst for water, but of hearing the words of the Lord” ~ Amos 8:11

But the commandment from God is still “see thou hurt not the oil and the wine.” This is prophetically speaking of the oil of the Holy Spirit and the wine of the Word of God. These are God’s two anointed ones, the two witnesses he has appointed to speak for him in the earth. Later in Revelation we see this same time in history shown as a time when these two witnesses (the Word and the Spirit) prophesied while in mourning because of the oppression of man.

“And I will give power unto my two witnesses, and they shall prophesy a thousand two hundred and threescore days, clothed in sackcloth. These are the two olive trees, and the two candlesticks standing before the God of the earth. And if any man will hurt them, fire proceedeth out of their mouth, and devoureth their enemies: and if any man will hurt them, he must in this manner be killed. These have power to shut heaven, that it rain not in the days of their prophecy: and have power over waters to turn them to blood, and to smite the earth with all plagues, as often as they will.” ~ Revelation 11:3-6

There is a consequence for going against God’s commandment and trying to hurt the oil and the wine! Spiritually, you will die for doing this. So what Revelation 6:6 is showing is: your withholding of ministering all of the Word may create a famine of hearing the Word, but you better not try to hurt (or blaspheme – speak disrespectfully of) the Word nor the Spirit of God!

Also, the rain being spoken of in the scripture above (Revelation 11:3-6) concerning the two witnesses is that of spiritual rain from heaven when God is pleased with his people and he sends his spiritual blessings on the gathering of the people. But when God was not pleased with his people, he would send a famine. And so in this post we are speaking of the famine of the black horse rider, because God is not pleased.

Do you remember that Jesus spoke of the gospel as being like “new wine” that would require a changed heart to be able to receive.

“And no man putteth new wine into old bottles; else the new wine will burst the bottles, and be spilled, and the bottles shall perish. But new wine must be put into new bottles; and both are preserved. No man also having drunk old wine straightway desireth new: for he saith, The old is better.” ~ Luke 5:37-39

Also note: When Jesus changed the water into wine it was “new wine” not old.  This is in agreement with the gospel being likened to new wine, not old wine.

Throughout the Old and New Testament, oil is representative of that special grace of God’s anointing upon those who fully obey him. This anointing is that of his Holy Spirit.

It was the burning oil in the candlestick that gave light to the Old Testament tabernacle. In Jesus’ parable of the wise and foolish virgins, it was oil in the lamps of the wise virgins that enabled them to be allowed into the great marriage feast. This burning oil represents the presence of the Holy Spirit in the worship, and in the individual.

So what understanding does the black horse rider give you and I today? Do we worship where there is a famine of the Word of God? Do we sit to hear music, songs, and a sermon that contains a small morsel of real substance from the Word of God? Are they disrespecting the Word of God by adding to it additional ideas, and taking away from the original teachings? Do you consider the Spirit of God to be nothing more than a showy “good feeling” spirit that any sinner can take on and display? Do those who preach to you have no fear to “hurt the oil and the wine”?

Is there a particular time in history when selling the Word of God for gain took root in a strong way? Many of the patterns in Revelation have their type in history. The beginning of the sale of the Word for gain was a common injustice of the Roman Catholic Church. The Bible was kept chained to the pulpit. The common people were not allowed access to it, nor could most read it because it was kept in a language they could not understand. By this the Catholic Church controlled and manipulated the use of the Word to their own advantage, and at a great cost to the people. Truly the ministry of the Catholic Church had the spirit of the black horse rider! Additionally, this manipulation of the Word for personal advantage would cause the people to:

The Roman Catholic Church is spiritually identified as coming to full power during the Pergamos church age. A time in history when Satan was given a special seat of authority, right among where many sincere people were still trying to serve God. And these sincere Christians then became the target of persecution!