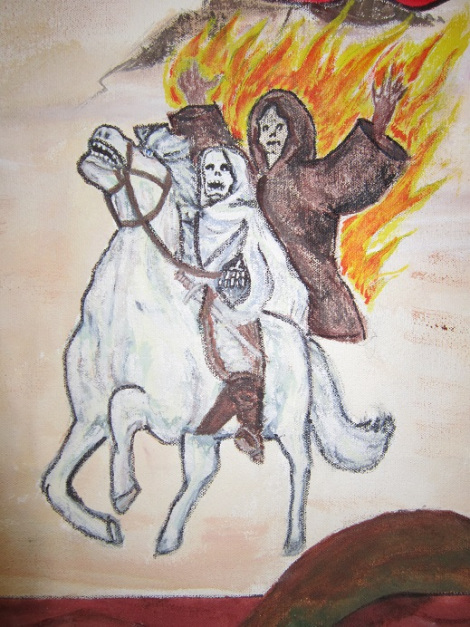 “And when he had opened the fourth seal, I heard the voice of the fourth beast say, Come and see. And I looked, and behold a pale horse: and his name that sat on him was Death, and Hell followed with him. And power was given unto them over the fourth part of the earth, to kill with sword, and with hunger, and with death, and with the beasts of the earth.” ~ Revelation 6:7-8

As stated in earlier posts, horses are a symbol of warfare.

So here now we have a pale horse rider who has the full power of the two evil horse riders before, and more! This one is now so skilled with manipulating the Word of God and abusing that authority, that he can actually kill both physically and spiritually with it! He kills by both the misuse of the Word of God, and by the sale of the Word of God. A totally corrupt ministry that uses their full power of deception as carnal beasts do: to rip up and destroy. Hence the power of sin in the sting of death, and eternity in hell, is following!

“name that sat on him was Death, and Hell followed with him. And power was given unto them over the fourth part of the earth, to kill with sword, and with hunger, and with death, and with the beasts of the earth”

“But these, as natural brute beasts, made to be taken and destroyed, speak evil of the things that they understand not; and shall utterly perish in their own corruption; And shall receive the reward of unrighteousness, as they that count it pleasure to riot in the day time. Spots they are and blemishes, sporting themselves with their own deceivings while they feast with you; Having eyes full of adultery, and that cannot cease from sin; beguiling unstable souls: an heart they have exercised with covetous practices; cursed children” ~ 2 Peter 2:12-14 KJV

“But these speak evil of those things which they know not: but what they know naturally, as brute beasts, in those things they corrupt themselves. Woe unto them! for they have gone in the way of Cain, and ran greedily after the error of Balaam for reward, and perished in the gainsaying of Core.” ~ Jude 1:10-11 KJV

When a ministry does not allow the Holy Spirit to work in them and through others, they then take the Word of God and administer it according to a corrupt influence based on:

They will kill the Spirit of God working, and their influence will cause their followers to also fall back into sinful practices of: lust, deceit, hatred, envy, division, etc.

Ultimately they don’t care about all of the body of Christ. They only care about those that are following them, or the part of the body that has the same preferences that they have regarding: gifts, administration, how they operate, or the clarity of understanding concerning a doctrine. It does not matter if someone has been saved and is walking obedient to all the light they know. All they care about is their preferences. But the scriptures teach us differently!

“That there should be no schism in the body; but that the members should have the same care one for another.” ~ 1 Corinthians 12:25 KJV

Do we care about all the saved today? Do we have the same care for every saved one, or only those who think like we do, and culturally administer the Word like we do. What is our spirit like?

Many of the types in Revelation have their type in history. Was there a time that the ministration of the Word of God was used in many ways, according to a particular minister’s or group’s preference? A time when they especially used the Word to cause divisions into different groups that would become sects of the “Christian faith” and yet there were wars and fighting among them? Does not the Protestant era of history reflect this?

“And power was given unto them over the fourth part of the earth, to kill with sword, and with hunger, and with death, and with the beasts of the earth”

Did not the Protestant era of history encompass approximately a fourth part of the earth? I believe that many were saved in the various divisions of Protestantism, but many of those were persecuted for their determination to live holy and true to Christ. And even more sad, many actually lost their spiritual life as they gave in to the pressure of pale horse ministers.

Have you been under the influence of a pale horse minister? Do you still have the life of holiness because of the power and direction of the Holy Spirit and God’s Word? Or has the death of sin been brought back into your life. Is hell now following close after you? The purpose of the Revelation message is to spiritually awaken us to these deceptions, so we can be free from sin and the corruptions of religion.