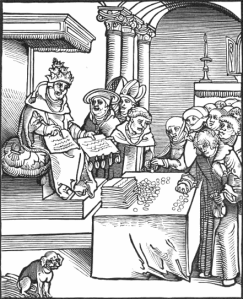 In spite of those who like faithful Antipas “holdest fast my name, and hast not denied my faith” there were others right among them causing trouble. (See earlier post: “Jesus Knows Where Satan’s Seat Is – Do You?“) Now because of this Jesus states “But I have a few things against thee.” This clearly reflects Jesus’ intention for his church to be taught from his own words without anything else mixed in with the scriptures. He does NOT accept a mixture of the “good” with the “bad” in his church. It is because it is HIS church. He paid dearly for it. He does not have to accept second best, and he never has. He always accepts the individuals throughout history, who like Antipas, held true in obedience to him. But he has NEVER accepted a church organization where the true are mixed with the fakes.

There may be sinners around the church, because how else would they ever get saved. But these type of sinners are not falsely professing to be Christians! What Jesus is against is the condition where sinners are professing to be Christians, and yet they still have sin in their lives. These types have a very bad influence on the true Christians and they work to “seduce” them into being like themselves: half-hearted, insincere, manipulative, politically oriented, and fake!

“For such are false apostles, deceitful workers, transforming themselves into the apostles of Christ. And no marvel; for Satan himself is transformed into an angel of light. Therefore it is no great thing if his ministers also be transformed as the ministers of righteousness; whose end shall be according to their works.” (2 Corinthians 11:13-15)

Notice who Jesus compares some of them to in Revelation 2:14 – Balaam.

Balaam was an Old Testament prophet who was offered a reward and promotion by an evil king, Balac. This reward would be earned if he could cause a “curse” to come upon the Israelites, who were God’s people. The Bible informs us that Balaam could not curse the Israelites himself, because they were favored of God (see Numbers chapter 22 through 24). Consequently, Balaam took another route and advised Balac on how to get the Israelites into a position where they would curse themselves, and consequently no longer be in favor with God. That was the only way that a curse from God would come upon them. So Balaam instructed the peagan king Balac to send the lustful Moabite women to seduce the men into taking part in their idolaterous worship practices. These practices included: “to eat things sacrificed unto idols, and to commit fornication.” (see Numbers 25:1-3 & 31:16)

With the guidance of Balaam’s counsel, Balac was able to get a portion of the Israelites to mix with peagan worship and fornication, and consequently get the Israelites to bring in a curse upon themselves. Then Balac was able to have some power to overcome them – but the true people of God were in the end victorious because they put away from them those who had compromised with evil worship and fornication.

After the beginning of the church, as she grew greatly, different church leaders began to seek the favor of the pagan rulers and kings. Following the spiritual example of Balaam, they little by little began to compromise the truth of the gospel to accommodate the agendas of pagan kings. This hunger for position and influence would lead to hierarchies of power in the church. Eventually the most influential church leader became known as the Pope. A man with a seat of authority in place of Jesus Christ.

Now as recorded in history, during the Pergamos age (or the “dark ages”) the Popes would become established as the King in the church, in the place of Christ. Like as Balaam sought reward from the wicked king Balac, so men who were supposed to be God’s ministers would seek for rewards and promotion from the Pope for doing his bidding – especially his bidding in persecuting and undermining anyone who would not accept the Pope as King.

Even today (just like back then) as long as you are willing to honor (and support in some way) a Pope, or some other preacher, they will tell you that you will be OK even though you still have sinful practices in your heart and life.

Ezekiel the prophet spoke of a people who would come as worshipers, but they really have their own sinful way of iniquity in their heart. Ezekiel described this condition as having an idol set up in their heart.

“Then came certain of the elders of Israel unto me, and sat before me. And the word of the LORD came unto me, saying, Son of man, these men have set up their idols in their heart, and put the stumblingblock of their iniquity before their face: should I be enquired of at all by them?” (Ezekiel 14:1-3)

This condition is described as the “stumblingblock of their iniquity before their face.” In other words they stumble because of disobedience to the Word, and they work through false worship to cause others also to stumble at the Word:

“Wherefore also it is contained in the scripture, Behold, I lay in Sion a chief corner stone, elect, precious: and he that believeth on him shall not be confounded. Unto you therefore which believe he is precious: but unto them which be disobedient, the stone which the builders disallowed, the same is made the head of the corner, And a stone of stumbling, and a rock of offence, even to them which stumble at the word, being disobedient: whereunto also they were appointed.” 1 Peter 2:6-8

Again, we read the scripture:

May I ask you where you are seeking your reward from? If you are more concerned with pleasing people than you are with obeying God’s Word, then you too are taking part with the spirit and methods of Balaam and are placing stumbling blocks before others. That’s no position to be in, because God judged and destroyed Balaam.