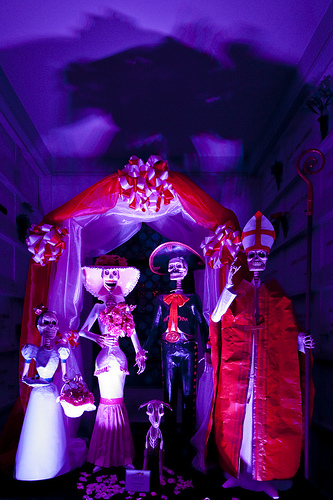 So hast thou also them that hold the doctrine of the Nicolaitanes, which thing I hate. (Revelation 2:15)

Remember what the Nicolaitanes are like from the previous post on Revelation 2:6 titled: “Only True Love Will Keep You Away From Free-Love“? Bible historians described the Nicolaitanes as a short lived sect in the early days of Christianity that promoted promiscuous sexual relationships among its believers. Spiritually it is a “free love” spirit where the people will fellowship and allow spiritual relationships with different types of so called “Christian” doctrines, many of which are actually derived from other Pagan religions. But here notice it is not just mentioned as being only a practice anymore (as it was named out in the Ephesus age as “the deeds of the Nicolaitanes” – see Revelation 2:6). Now in the Pergamos age it has become more than a practice. It also has become a formal doctrine, or principle teaching of many of the people.

Actually this is a natural progression in “falling away” from Christ:

During this Pergamos, or “Roman Catholic” age, the Catholic Church would proselytize many pagan countries over to themselves. In each case they eased the so-called “conversion” process and increased their effectiveness and numbers by incorporating many of the pagan practices and deities into the Catholic doctrine. They would rename the pagan gods with the names of the apostles, or Mary, etc. And many of these same false teachings of the Catholic Church have also carried over into Protestantism in one form or another.

The Bible tells us that baptism is an outward testimony telling of what God has already done in the heart when we forsake all our sins and have received forgiveness for them. It tells everyone who witnesses the baptism that we have sincerely repented and fully turned away from sin to honor and obey Christ. In baptism we are buried in the water, showing that we have died to the old life of sin. Then we are brought out of the water to show that we have completely resurrected to live a new life in Christ Jesus, holy and obedient to him.

“Therefore we are buried with him by baptism into death: that like as Christ was raised up from the dead by the glory of the Father, even so we also should walk in newness of life.” (Romans 6:4)

“Buried with him in baptism, wherein also ye are risen with him through the faith of the operation of God, who hath raised him from the dead.” (Colossians 2:12)

Again, baptism is a public testimony of this event that has already taken place in our heart and life. When John the Baptist saw that non-repentant, religious-minded people had come to be baptized, he strongly forbade them and told them to get saved first! John the Baptist wanted to see the fruit of a new life and attitude first before he would baptize them.

“But when he saw many of the Pharisees and Sadducees come to his baptism, he said unto them, O generation of vipers, who hath warned you to flee from the wrath to come? Bring forth therefore fruits meet for repentance:” (Matt 3:7-8)

But Catholicism (and later Protestants would do the same) twisted this doctrine of baptism back into the common pagan religious belief in a baptism ritual where the actual act of baptizing was supposed to cleanse you and save you. But Baptism does not save you, it is rather the testimony of the heart. It is an answer of a clear and “good conscience toward God.”

“Which sometime were disobedient, when once the longsuffering of God waited in the days of Noah, while the ark was a preparing, wherein few, that is, eight souls were saved by water. The like figure whereunto even baptism doth also now save us (not the putting away of the filth of the flesh, but the answer of a good conscience toward God,) by the resurrection of Jesus Christ:” (1 Peter 3:20-21)

The word baptism literally translates to “immersion” or “burial”, and this is the way it was originally done. (It was later that men changed it to sprinkling or pouring water.) As stated in the scripture above, baptism does not cleanse, but it is rather a testimony of “a good conscience toward God.” The fact that Jesus was baptized before he started his ministry (the one born without sin, and who never did sin) proves that it does not save from sin, but is a testimony. Jesus was testifying to the world, and setting an example for everyone else, that our lives need to be completely consecrated to the purpose and will of God.

Now there were other false teachings that became formal doctrines during the Pergamos age, for example:

The practice and doctrine of communion was modified to incorporate ancient Egyptian practices, including the doctrine and belief in transubstantiation. Transubstantiation is the belief that the bread and wine physically become the actual body and blood of Jesus. In stead of the communion being done as a memorial of Jesus’ body and blood that was shed for us, they re-made it into a physical belief, just like the way the pagans would do it.

The list of false doctrines that were mixed in could go on, and on; and is verifiable by any honest soul by simply by going to a local library or researching it amongst a mass of historical documentation available over the Internet.

Now the final point that Jesus makes concerning false doctrines in this fifteenth verse of Revelation 2 is that: God hates this “love any doctrine” practice!