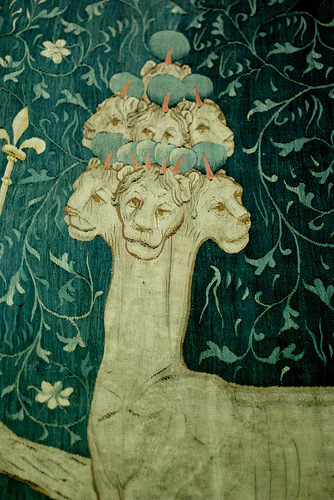 When Revelation speaks of evil beasts, is it speaking of kingdoms with the power to rule on earth? Yes.

Read it for yourself and it is very evident that the heads and horns of these beasts, represent the workings of people in high places of authority and power on earth. It is also very evident that Satan’s deceptive powers are actually in control of these beast-like men and women. In Revelation the 12th and 13th chapters, the beasts are revealed in the context of the battle of the Kingdom of God against the kingdom’s of the beasts. In the 17th chapter, the “eighth” beast is described in the context of kings and kingdoms: pulling together all earthly kingdoms into one final beast.

You have heard perhaps of the coming of “one world government” or the “new world order.” Do these reflect this reference to the final eighth beast? Yes they do.

These changes in world governments are a continued growth in other political “organizing powers” that you have heard of like the World Counsel of Churches and the United Nations. They are all governments of men (who have beast-like natures), and consequently they must gather together into beast-like power structures.  And they all have the spirit of antichrist.

But this is nothing new. It has been this way since Christ first came to earth to save souls and establish his Kingdom of holiness.

“The kings of the earth stood up, and the rulers were gathered together against the Lord, and against his Christ. For of a truth against thy holy child Jesus, whom thou hast anointed, both Herod, and Pontius Pilate, with the Gentiles, and the people of Israel, were gathered together, For to do whatsoever thy hand and thy counsel determined before to be done.” Acts 4:26-28

Herod and Pontius Pilate, and the Gentiles and Jews all hated each other. But when they met Christ, they found Jesus and his Kingdom a threat to their kingdoms. So they suddenly came together to fight against the King of kings and Lord of lords. And so they crucified him, and later persecuted those of Christ’s Kingdom. But it was their kingdoms that came to an end. And Christ’s Kingdom of salvation and holy living, is still alive today in the hearts of those who love him.

And so has the battle been going since the beginning of the Gospel. But because Satan’s first beast, the dragon, was delivered a very effective wound by the sword of the Spirit, the Word of God: he had to reorganize into another kingdom (see Revelation 12 and 13). Hence we have the beast, and another subsequent beast and image to fight against the Kingdom of God. (Much more to be said on all this later.)

The problem is that today people are looking for one big Antichrist being fulfilled in one person. Just as they are looking outwardly for a beast-power to arise. But both the antichrist and the beast are first spiritual conditions that exist in every individual, until that they have fully given their personal kingdom to Jesus Christ and his Kingdom. The reason the “gathered together” kingdoms of this world are described as “beasts” is because they are made up of people who still have sinful beast-like natures. Consequently they also have leaders who have sinful beast-like natures. It is the nature of the individuals that cause this “new world order” to be beast-like.

The question is “what is your nature like?” For that will determine before God whether you are part of the beast or not. This is why in previous posts I have addressed this personal need that everyone has to get rid of their beast nature. You can read those posts here:

So what about this single Antichrist that is supposed to come? I don’t know? I cannot find in scripture any such description. But instead I find the scriptures plainly state that there are many antichrists, and that they have all been around since Jesus’ time. And that it is not a single person, but rather it is an evil spirit that works through many people, in opposition to Jesus and to true Christians.

So, is your testimony: Jesus Christ has come in you? Has his Holy Spirit come to reign in your flesh? Is he honored as King over your life by your complete obedience to him? Or is there in you another sinful spirit in opposition to Jesus. An antichrist spirit that is still working within?

“But what about the man of sin spoken of in 2 Thessalonians the 2nd chapter?” We will take more time to examine this “man of sin” in the next post.

In the mean time, let me ask you: are you still operating under the influence of the sinful beast-like nature? Are you still part of that gathering that gives life to the beast?