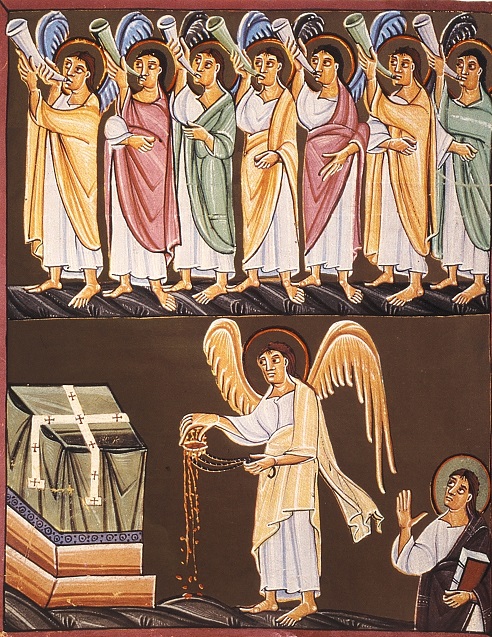 I’m speaking of the breaking of silence that is spoken about in the book of Revelation chapter 8, verses 1 through 5.

The silence is not people being silent. But it rather is the silence when there is a lack of the earthquake of conviction upon lost souls. This is a spiritual silence that only God can break. It is as if God has been waiting for something different from the church. But what could that be?

The Daily Sacrifice of the Old Testament:

To understand how the silence is to be broken, we need to understand the spiritual pattern that is being shown to us in the scripture above. It is a pattern that matches the Old Testament morning and evening sacrifice:

The morning and evening sacrifice was a critical part of their spiritual life and success.

“And thou shalt say unto them, This is the offering made by fire which ye shall offer unto the Lord ; two lambs of the first year without spot day by day, for a continual burnt offering. The one lamb shalt thou offer in the morning, and the other lamb shalt thou offer at even; And a tenth part of an ephah of flour for a meat offering, mingled with the fourth part of an hin of beaten oil. It is a continual burnt offering, which was ordained in mount Sinai for a sweet savour, a sacrifice made by fire unto the Lord.” ~ Numbers 28:3-6

So critical to the spiritual life of the Old Testament Israelites was this daily sacrifice, that the removal of this worship and prayer time created a wide open door to Satan to have the upper-hand against God’s people! It was one of the darkest times in their entire history. The prophet Daniel prophesied of it. And it happened during the time of the Maccabees.

“Yea, he magnified himself even to the prince of the host, and by him the daily sacrifice was taken away, and the place of his sanctuary was cast down. And an host was given him against the daily sacrifice by reason of transgression, and it cast down the truth to the ground; and it practised, and prospered.” ~ Daniel 8:11-12

The beginning of the first daily sacrificed started in the days of Moses. God first consumed this sacrifice with heaven sent fire, and then it was the responsibility of the people to keep offering a daily sacrifice and to always keep the fire burning.

“And Moses and Aaron went into the tabernacle of the congregation, and came out, and blessed the people: and the glory of the Lord appeared unto all the people. And there came a fire out from before the Lord, and consumed upon the altar the burnt offering and the fat: which when all the people saw, they shouted, and fell on their faces.” ~ Leviticus 9:23-24

The High Priest would take coals of fire off the altar sacrifice, and he would use those same coals to offer incense on the golden altar which was before the veil in the holy place of the tabernacle (while at the same time all the people agreed in prayer in the court near the altar of sacrifice.)

No flesh could be included with the coals the High Priest would take inside the tabernacle. Nor could any other fire be used to offer this intercessory prayer incense, or else the priests would die (see Leviticus 10:1-2)

“And Nadab and Abihu, the sons of Aaron, took either of them his censer, and put fire therein, and put incense thereon, and offered strange fire before the Lord, which he commanded them not. And there went out fire from the Lord, and devoured them, and they died before the Lord.” ~ Leviticus 10:1-2

The Spiritual Morning Sacrifice of the “Gospel Day”:

The day of Pentecost was part of the morning of the “gospel day” which we are now living in. The Gospel day began when Jesus Christ was born on Earth. The Gospel day will end, at the end of this world.

More: This all happened at the time of the morning sacrifice!

“And it came to pass at the time of the offering of the evening sacrifice, that Elijah the prophet came near, and said, Lord God of Abraham, Isaac, and of Israel, let it be known this day that thou art God in Israel, and that I am thy servant, and that I have done all these things at thy word. Hear me, O Lord, hear me, that this people may know that thou art the Lord God, and that thou hast turned their heart back again. Then the fire of the Lord fell, and consumed the burnt sacrifice, and the wood, and the stones, and the dust, and licked up the water that was in the trench. And when all the people saw it, they fell on their faces: and they said, The Lord, he is the God; the Lord, he is the God.” ~ 1 Kings 18:36-39

“Then were assembled unto me every one that trembled at the words of the God of Israel, because of the transgression of those that had been carried away; and I sat astonied until the evening sacrifice. And at the evening sacrifice I arose up from my heaviness; and having rent my garment and my mantle, I fell upon my knees, and spread out my hands unto the Lord my God” ~ Ezra 9:4-5

The place between the porch and the altar is where the priests, ministers, and the people would gather to pray during the evening sacrifice.

Important Note: Although the morning and evening sacrifice was by the law, the gathering to pray was not by a commandment in the Law. It happened because of the people who had a common burden and purpose to do so. People were moved in their hearts to pray this sacrificial prayer by God’s Spirit, not by a commandment!

Some have felt that the preaching of the gospel message of truth against hypocrisy, the sounding of the seven trumpets in the seventh seal, is that event which broke the silence. But what does the scripture and the pattern show?

The New Testament high priest angel (Jesus Christ), standing in the office of the high priest, offered incense with the prayers of all saints who gathered as one in prayer.

“And another angel came and stood at the altar, having a golden censer; and there was given unto him much incense, that he should offer it with the prayers of all saints upon the golden altar which was before the throne. And the smoke of the incense, which came with the prayers of the saints, ascended up before God out of the angel’s hand.” ~ Revelation 8:3-4

Then the high priest angel cast fire from altar into earth (the saints) which broke the silence by the resulting: voices, thunderings, lightnings, and an earthquake.

“And the angel took the censer, and filled it with fire of the altar, and cast it into the earth: and there were voices, and thunderings, and lightnings, and an earthquake. And the seven angels which had the seven trumpets prepared themselves to sound.” ~ Revelation 8:5-6

Then 7 angels who were given the seven trumpets, (the angel-messengers, or minister’s who first prepared themselves at one common altar of sacrifice), could now prepare themselves to sound: after that the silence had been broken by the high priest, Jesus Christ.

What are we waiting for? Are we waiting for the threat of being killed before we join our prayers with them at this altar of sacrifice? The Apostles on the day of Pentecost were living under a potential threat from their own people. Perhaps we need the same inspiration today?

Did you know that Jesus gathered at that altar of sacrifice first to pray there before us? And he had a particular burden that he expressed when he prayed there. He expressed this prayer when he was in the garden, before he was going to be crucified.

It is interesting that many have titled the 17th chapter of the Gospel of John as “The High Priestly Prayer.” Do you suppose that is the prayer this angel is expressing in Revelation the 8th chapter? Could he be praying again that way even today?

Is this why the high priest angel in Revelation chapter 8 first stands at the altar? Is he praying and waiting for his prayer to be answered of having all saints to gather, and agree as one sacrifice offered to the Lord?

Is he having to search for some of us to pray with him, like he had to do with his Apostles?

The disciples did not gather at the sacrificial altar at that time. So when it came time for Jesus to be crucified, they were not able to be identified with him in such a way, and so they fled before the enemy. Satan certainly prevailed against them at that time. So Jesus had to go to the altar of sacrifice alone, and wait until the time later when his disciples would gather there again to stay, on the day of Pentecost.

Are you ready to gather at that altar? Remember there is only one altar, and our sacrifice is to be offered together with everyone else’s. Are you able to do that? Or do you have a division that needs to be reconciled in your life?

Are you able to sacrifice and pray at this evening time of the gospel day? Have you prepared your whole heart, soul, mind and strength to do so, or will you flee in retreat before the threat of Satan and his armies?

Are you ready for the evening sacrifice? Do you really want the spiritual silence to be broken?