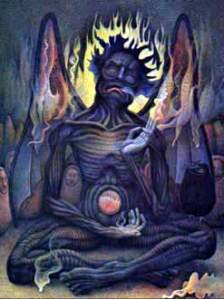 Here we see some of the results of the previous two ages (Ephesus and Smyrna), and the result that happens when people do not take heed to Jesus’ warnings:

Now in Pergamos, these same type of worshipers of the “synagogue of Satan” have established a place of authority for Satan, and Jesus calls it “Satan’s seat” and identifies it as being right amongst even where the true worshipers worship also. In the hearts of people is where God’s “seat” of honor and authority belongs. “Satan’s seat” happens when God’s place of honor and authority within the hearts of people has been supplanted by someone else or some false doctrine of a false church. The result is, and will always be when Satan’s seat moves in, that the true worshipers are suffering persecution at the hands of so-called “Christians”. This also is especially what happened during the period of time often referred to as the “Roman Catholic age”, or the “dark ages” – although it also has spiritually happened in many other ages and churches. Anytime Satan is around and has a seat of authority within the hearts of people, you’ll find him modifying Jesus words and interpreting them in a way that pleases the evil desires and agendas of people, and ultimately makes room for sin in their lives.

“Then spake Jesus to the multitude, and to his disciples, Saying The scribes and the Pharisees sit in Moses’ seat: All therefore whatsoever they bid you observe, that observe and do; but do not ye after their works: for they say, and do not. For they bind heavy burdens and grievous to be borne, and lay them on men’s shoulders; but they themselves will not move them with one of their fingers. But all their works they do for to be seen of men: they make broad their phylacteries, and enlarge the borders of their garments, And love the uppermost rooms at feasts, and the chief seats in the synagogues,” (Matthew 23:1-6)

“But why dost thou judge thy brother? or why dost thou set at nought thy brother? for we shall all stand before the. For it is written, As I live, saith the Lord, every knee shall bow to me, and every tongue shall confess to God. So then every one of us shall give account of himself to God. Let us not therefore judge one another any more: but judge this rather, that no man put a stumbling block or an occasion to fall in his brother’s way.” (Romans 14:10-13)