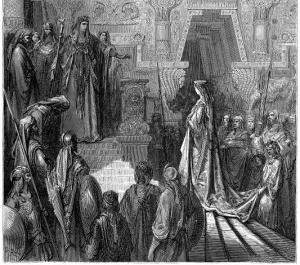 “Notwithstanding I have a few things against thee, because thou sufferest that woman Jezebel, which calleth herself a prophetess, to teach and to seduce my servants to commit fornication, and to eat things sacrificed unto idols.” (Revelation 2:20)

Jezebel – who was she? She was the wicked Old Testament wife of King Ahab, the King of Israel (see I Kings 16 – 21, and II Kings 9.) By the time of the writing of the Book of Revelation she had been dead approximately 1000 years. Consequently, this verse is not speaking of a specific person, but rather the spiritual condition that this person represents and how she operated. Notice the resulting effect of this spiritual influence of “Jezebel” – the same result that occurred in the previous church age of Pergamos: “to commit fornication, and to eat things sacrificed unto idols.”

But notice that in the previous Pergamos age that there were some who held to the “doctrine of Balaam” and the “doctrine of the Nicolaitanes.” They needed to repent of both false “doctrines” to overcome. In the Thyatira age we don’t just have a false doctrine, but we also have a highly respected and honored “teacher” – a wicked pagan woman who has (in the minds of many) worked herself into the position of being the queen of the King of Israel (like she did in the Old Testament.) In the Old Testament the queen was, next to the King, the highest place of human honor among the people of God. In Thyatira she is professing to be a “prophetess” and is being allowed to even “teach” Jesus’ servants, and thereby “seduce” them into evil relationships, and even idolatry. Spiritually she is being highly honored by men and women as if she was something very special.

In the Old Testament, Balaam helped Balac use pagan women and idolatrous practices to “cast a stumbling block” before the people, but Israel was able to repent and overcome the stumbling block and go on. Why, because the Israelites did not recognize Balac as their king, nor his kingdom as being their kingdom. At that time, Moses was their spiritual leader and God was their King, not a man! In the Pergamos church age Balaam’s false doctrine was a “stumbling block before the children of Israel,” but the scripture teaches us that:

“Lay not wait, O wicked man, against the dwelling of the righteous; spoil not his resting place: For a just man falleth seven times, and riseth up again: but the wicked shall fall into mischief.” (Proverbs 24:15-16)

In Pergamos it was a “stumbling block” that some were not on their guard against and they would stumble over it, but the truly righteous could rise again from it, and repent of it to walk right with God. False pagan teachings had been mixed so long with the Gospel that many would stumble over them in their sincere attempts to seek God with all their heart. It was a “stumbling block” they would be able to overcome because they did нет accept the notion of the church being ruled by the Pope or the Pope being the head of the church. Those who honor the Pope as the head are not the bride of Christ. The true bride of Christ is true to Jesus, and the true church is the mother and true teacher of all the saved. The true bride of Christ is also described as the true spiritual city of God, the heavenly Jerusalem, the true church of God.

But in Thyatira it is no longer just a “stumbling block” to the people of God, but now it is also a spiritual woman, a false church, who “saith in her heart, I sit a queen, and am no widow, and shall see no sorrow.” (Rev 18:7) who is recognized as a true “prophetess” of God. In the Old Testament, Jezebel was recognized and honored by the majority of Israelites as the Queen of the Israelite nation. Therefore many fell into paganism never to rise again. In Thyatira, because many recognize and honor spiritual Jezebel, a false church, it is no longer just a “stumbling block” but rather a teaching and a false fellowship that they believe came from God himself because of the “church” and the “preachers” that the people honor and trust in.

The “queen” she pretends to be is the “bride of Christ.” She has them believing they are receiving “truth” from their spiritual mother the true church of God, but she is NOT the church! The church systems of Protestantism pulled this evil seduction off. They tricked many by saying they were not married, or a part of the Pope’s Catholic Church, but rather were married directly to Jesus. Many true Christians, ones whom Jesus called “my servants” were seduced by believing in, fellowshipping, and following some Protestant denomination and their false doctrines. When they did, most of them never did repent and arise again! In the Old Testament (unlike the influence of Balaam that Israel overcame,) after the rule and influence of Jezebel, the nation of Israel was eventually conquered and carried away by a foreign power because as a nation they never did rise above and overcome the idolatrous practices that the pagan queen Jezebel brought in.

“God hath not cast away his people which he foreknew. Wot ye not what the scripture saith of Elias? how he maketh intercession to God against Israel saying, Lord, they have killed thy prophets, and digged down thine altars; and I am left alone, and they seek my life. But what saith the answer of God unto him? I have reserved to myself seven thousand men, who have not bowed the knee to the image of Baal. Even so then at this present time also there is a remnant according to the election of grace.” (Romans 11:2-5)

Yes, even today there is a remnant that have not bowed to being just a religious member of a “so-called” Christian church. Instead, they are living holy and true to Jesus and his Word!

“And one of the elders answered, saying unto me, What are these which are arrayed in white robes? and whence came they? And I said unto him, Sir, thou knowest. And he said to me, These are they which came out of great tribulation, and have washed their robes, and made them white in the blood of the Lamb. Therefore are they before the throne of God, and serve him day and night in his temple: and he that sitteth on the throne shall dwell among them. They shall hunger no more, neither thirst any more; neither shall the sun light on them, nor any heat. For the Lamb which is in the midst of the throne shall feed them, and shall lead them unto living fountains of waters: and God shall wipe away all tears from their eyes.” (Revelation 7:13-17)