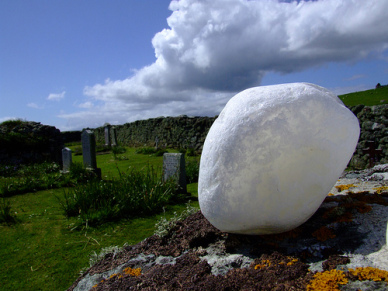 “He that hath an ear, let him hear what the Spirit saith unto the churches; To him that overcometh will I give to eat of the hidden manna, and will give him a white stone, and in the stone a new name written, which no man knoweth saving he that receiveth it.” (Revelation 2:17)

Notice that Jesus said that to the overcomers he “will give him a white stone, and in the stone a new name written, which no man knoweth saving he that receiveth it.”

A “white stone” was given to the over-comers – and it is something that is associated with showing a token of approval from the highest authority:  Jesus. In the ancient world of that day, the giving of a white stone was known as a token of favor, prosperity, or success, in almost every major culture. The giving of a white stone to the accused was often the way that a judge or ruler would show that an accused was “not-guilty”.

Now in this token of approval Jesus said there would be a “new name written” which also (like the hidden manna) would be hidden from the knowledge of most – but known to those who “receive it.” This stone represents the special favor God has upon his true people, especially when they have been falsely accused like “Antipas was my faithful martyr, who was slain among you, where Satan dwelleth” (see Revelation 2:13). Those who truly have received him and love and obey him are his, and the witness of this acceptance is known by them – but not by false hypocrites.

“For as many as are led by the Spirit of God, they are the sons of God. For ye have not received the spirit of bondage again to fear; but ye have received the Spirit of adoption, whereby we cry, Abba, Father. The Spirit itself beareth witness with our spirit, that we are the children of God: And if children, then heirs; heirs of God, and joint-heirs with Christ; if so be that we suffer with him, that we may be also glorified together.” (Romans 8:14-17)

The true saints may suffer for being “true and faithful,” but they shall have the blessing of “a new name” witness in their soul to comfort and keep them. A new “family” name because they have been adopted – and also, the true believers collectively are “married” to Christ, and in that adoption and marriage they also take on the true family name of the family of God.

“For Zion’s sake will I not hold my peace, and for Jerusalem’s sake I will not rest, until the righteousness thereof go forth as brightness, and the salvation thereof as a lamp that burneth. And the Gentiles shall see thy righteousness, and all kings thy glory: and thou shalt be called by a new name, which the mouth of the LORD shall name. Thou shalt also be a crown of glory in the hand of the LORD, and a royal diadem in the hand of thy God. Thou shalt no more be termed Forsaken; neither shall thy land any more be termed Desolate: but thou shalt be called Hephzibah, and thy land Beulah: for the LORD delighteth in thee, and thy land shall be married. For as a young man marrieth a virgin, so shall thy sons marry thee: and as the bridegroom rejoiceth over the bride, so shall thy God rejoice over thee.” (Isaiah 62:1-5)

In the Old Testament, the names of the children of Israel, the twelve tribes of Israel, (this describing the chosen family) were engraven on stones:

“And thou shalt take two onyx stones, and grave on them the names of the children of Israel.” (Exodus 28:9)

This was done as a “memorial” regarding the children of Israel, so that the true people of God, represented by these stones, would be worn by the High Priest as a memorial before the Lord. The true worshipers in their heart would also continue to bear a memorial of the true people of God before other true worshipers, and before the Lord, that a remembrance of true worship in the heart would not be forgotten. (See Exodus 28:12.)

The engravings of the names of the 12 tribes of Israel, and the engraving of the words “HOLINESS TO THE LORD” were to be engraved in the same manner that a “signet” is engraved.

“With the work of an engraver in stone, like the engravings of a signet, shalt thou engrave the two stones with the names of the children of Israel: thou shalt make them to be set in ouches of gold.” (Exodus 28:11)

“And thou shalt make a plate of pure gold, and grave upon it, like the engravings of a signet, HOLINESS TO THE LORD.” (Exodus 28:36)

A signet was a special seal (often placed on a king’s own ring) that would be used to designate authenticity as coming from the appropriate authority. The signet would be used for numerous reasons such as establishing an authentic seal on a document as coming from the authority of the king. So the special name on the white stone would be from King Jesus and carry the highest approval and authority of authenticity to those who would receive it.

Also in the Old Testament, Elijah would show the people of God (who where under the influence of the idolaterous Queen Jezabel) how to worship by building an altar with stones representing the whole family of God as one altar in worship to the true God:

“And Elijah said unto all the people, Come near unto me. And all the people came near unto him. And he repaired the altar of the LORD that was broken down. And Elijah took twelve stones, according to the number of the tribes of the sons of Jacob, unto whom the word of the LORD came, saying, Israel shall be thy name: And with the stones he built an altar in the name of the LORD: and he made a trench about the altar, as great as would contain two measures of seed.” (I Kings 18:30-32)

In Psalms it fortells of a time when all the true people of God would arise to remember Zion’s stones (the place of true worship) and take pleasure in them to rebuild again the true worship:

“Thou shalt arise, and have mercy upon Zion: for the time to favour her, yea, the set time, is come. For thy servants take pleasure in her stones, and favour the dust thereof.” (Psalms 102:13-14)

The true worshipers today are the stones that make up the true house of God:

“Ye also, as lively stones, are built up a spiritual house, an holy priesthood, to offer up spiritual sacrifices, acceptable to God by Jesus Christ.” (I Peter 2:5)