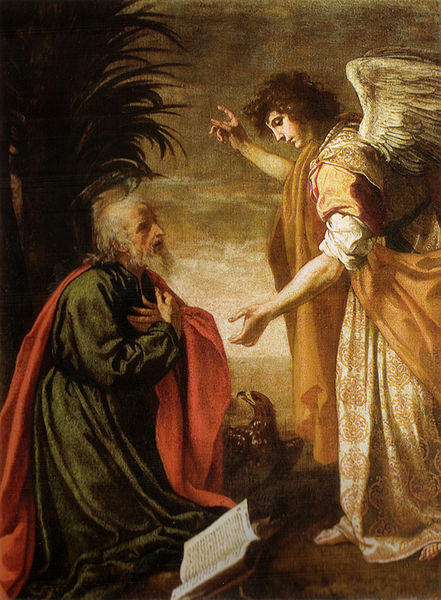 Note: Most painters have portrayed the angel with wings, but the scriptures show the angel messenger to only be a man.

An angel, (or messenger according to the original word meaning), had just revealed both the hypocrisy of false Christianity (spiritual Babylon), and the true faithfulness of the true church (the bride of Christ). So the Apostle John was so thrilled, that not thinking he fell down to worship this preacher.

Clearly this angel is actually just a man, because both here and at the end of Revelation, John makes the same mistake. And both times he is corrected by the angel, reminding John that he, the angel, is only a man. A human who is preaching a revelation message.

Twice this is recorded in Revelation to emphasize the importance to not worship man: no, not even a good preacher that faithfully preaches the truth. “Worship God only!”

There is an article I read recently titled: “Man, Movement, Monument.” The point of the article: a man gets saved and is anointed by the Spirit of God to preach the gospel. Many other people are moved by this inspiration and a Christian movement forms. But the people are following the “man’s inspiration” and they don’t learn to depend upon the Spirit of God to continue to lead them where and how the Holy Spirit chooses. Consequently, after the first “man” passes away, the people doctrinalize the “man’s” administration, operations, and gifts, and essentially build a monument to these things, which then formulates into a sect, or a separate church. This Church becomes governed by the monument, and no longer by the leading of the Holy Spirit and the whole Word of God. And so the pattern: “man, movement, monument” has repeated itself many times thought history!

This has a lot to do with how many of the denominations of “Christian” religion came into initial existence today.

“Then saith he unto me, See thou do it not: for I am thy fellowservant, and of thy brethren the prophets, and of them which keep the sayings of this book: worship God.” ~ Revelation 22:9

To worship God, you must worship him in Spirit and in truth – and do this yourself, personally.

“I marvel that ye are so soon removed from him that called you into the grace of Christ unto another gospel: Which is not another; but there be some that trouble you, and would pervert the gospel of Christ. But though we, or an angel from heaven, preach any other gospel unto you than that which we have preached unto you, let him be accursed. As we said before, so say I now again, If any man preach any other gospel unto you than that ye have received, let him be accursed.” ~ Galatians 1:6-9

Again, twice we are warned to emphasize the importance: “Worship God only.” You, yourself consecrate completely to both the Spirit of God and the Word of God! Let God himself be your inspiration, and not just a man. And only place God alone as the one receiving your worship.