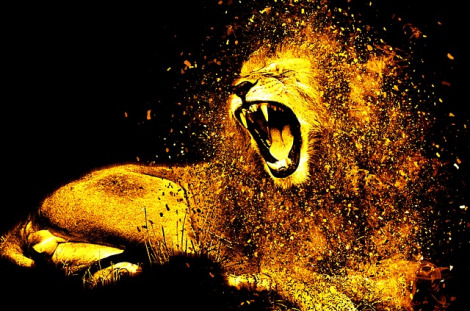 As stated before, the vials of God’s wrath represent the preaching of a true gospel message against hypocrisy.

This seat of the beast was established in spiritual Pergamos, when Satan, through the fallen leadership of Roman Catholicism, was able to establish enough authority to start persecuting true Christians. (Of course, this was fulfilled during the dark ages of Papal rule.)

“I know thy works, and where thou dwellest, even where Satans Sitz is: and thou holdest fast my name, and hast not denied my faith, even in those days wherein Antipas was my faithful martyr, who was slain among you, where Satan dwelleth.” ~ Revelation 2:13

Satan’s seat of authority was in the evil hearts of people who love the praise of men more than the blessings of obedience to God. Therefore they allow man to take the place of Jesus, and to be the judge of what is right or wrong. This is also represented by the religious organization “beast” of Revelation.

So here in the fifth vial, the seat of authority that is being judged by God’s wrath belongs to the beast. In Revelation 13 the beast is shown to be a religious organization with earthly power to blaspheme (or disrespect) God and his people.

“And he opened his mouth in blasphemy against God, to blaspheme his name, and his tabernacle, and them that dwell in heaven. And it was given unto him to make war with the saints, and to overcome them: and power was given him over all kindreds, and tongues, and nations.” ~ Revelation 13:6-7

This same beast came out of the sea, a symbol that represents “people, multitudes, nations and tongues” (see Revelation 17:15). The sea already had a vial of judgement wrath poured out on it back in Revelation 16:3. So it only makes sense that that which came out of the evil sea, would also be evil, and therefore also need the wrath of God’s judgement.

As stated in earlier posts, these vials of judgement wrath preaching are designed to help awaken people out of their darkness and sinful deception. So the vials represent a completion of the final judgement upon a target: what the vial was poured out on. So once poured out, there is no doubt that there is nothing good left in what it was poured out on. But also notice, each vial corresponds to completing the judgment that the related trumpet already started addressing: and that is the fifth trumpet.

In the fifth gospel trumpet of Revelation, we are warned that a ministry with the “key” of the Word of God, has abused this key, to open up the deceptions of Satan, from the bottomless pit. They also took the Word of God to themselves, to use it to establish their own seat of authority. So that they could hurt people with it by exposing sin, but withhold enough of the Word, so that people would not know how to fully consecrate their lives to God, to completely overcome all sin. By doing this, they took the authority to judge by the Word, and to bring people under their own power and authority, not God’s authority. So they established their own seat of authority, showing themselves, during the Protestant age, to have the same beast nature as the Roman Catholic Church. In doing so, the fifth trumpet warns us, that this ministry inflicted spiritual pain upon the people.

And so in this fifth vial of final judgment wrath, God is causing this false ministry to feel the pain of their own spiritual sores, because of what they have done to others. They are reaping what they have themselves sown. So for many people, this judgement is very painful. It is because their religion is exposed as being completely full of darkness. But because they don’t want to let go of it, they still strongly resist this judgement, and in doing so they blaspheme (disrespect) God.

So does this vial cause you pain and spiritual sores? Don’t blaspheme (disrespect) God any further. Repent of the hypocrisy of beast like “Christianity” and quit both sin and playing church. Then you can have the authority to take a stand for holiness and full obedience to Jesus Christ and his Word.

Note: this diagram below shows where the fifth vial message is within the full Revelation message. These “vials of God’s wrath” messages complete the purpose of God to destroy the influence of hypocrisy. To better understand a high level view of Revelation, you can also see the “Fahrplan der Offenbarung.“ 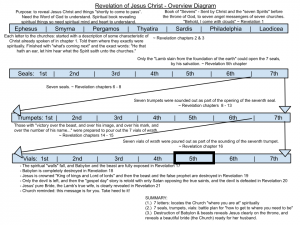