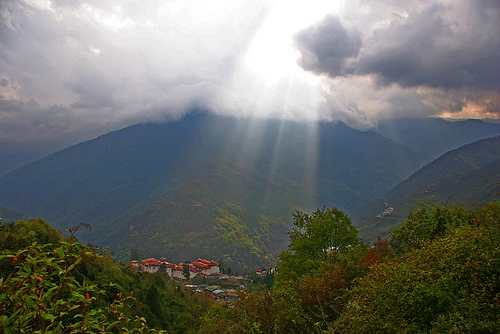 “He that hath an ear, let him hear what the Spirit saith unto the churches.” (Revelation 3:22)

There is an echo coming from Jesus himself that has been heard now seven times. No other place do we have record of the direct words of Jesus being repeated exactly the same way seven times, except in these seven messages to the seven churches in the book of Revelation.

Truly the Spirit has also spoken to us today concerning these seven churches, for to us they speak of seven church ages, or to the spiritual needs of seven spiritual conditions throughout history.

But there is only one Holy Spirit. So we see that these seven “Spirits of God”, representing the Holy Spirit working in every age of time. And notice: they are “before the throne” of God. The throne is that place where God reigns and gives commandment with all authority. And what is being shown is that this is actually the Holy Spirit working through his ministry, or angels – meaning his message bearers. God’s true ministry do God’s commandments, and not their own. They get the Word from God and deliver it to the church.

“And of the angels he saith, Who maketh his angels spirits, and his ministers a flame of fire. But unto the Son he saith, Thy throne, O God, is for ever and ever: a sceptre of righteousness is the sceptre of thy kingdom…  …But to which of the angels said he at any time, Sit on my right hand, until I make thine enemies thy footstool? Are they not all ministering spirits, sent forth to minister for them who shall be heirs of salvation?” (Hebrews 1:7-8 & 13-14)

The true ministry filled with the Holy Spirit are those ministering spirits. But the reason there are seven is to show that God does chose to work differently at times and in different situations: depending upon the culture of the people, and the particular needs of the people.

Therefor it is as if they were seven different spirits.

They are also as the eyes of the Lord in the earth to warn and show people how to be saved through Jesus Christ. These ministering spirits are sent forth by the Lamb of God, Jesus Christ.

“And I beheld, and, lo, in the midst of the throne and of the four beasts, and in the midst of the elders, stood a Lamb as it had been slain, having seven horns and seven eyes, which are the seven Spirits of God sent forth into all the earth.” (Revelation 5:6)

And why are these seven Spirits of God working through the seven angel messengers to the churches? They are being sent from before the throne of God to put away all evil ways from before the Lord and to establish God’s kingdom in righteousness only.

“Take away the dross from the silver, and there shall come forth a vessel for the finer. Take away the wicked from before the king, and his throne shall be established in righteousness.” (Proverbs 25:4-5)

In God’s mercy he is sending his true ministry to clean up and clear the way for every honest soul to be saved and live in true holiness. But for everyone who will not put away their evil and religious self-righteousness, God will bring them before his final throne of judgement, but there will no longer be mercy anymore at that time.

“When the Son of man shall come in his glory, and all the holy angels with him, then shall he sit upon the throne of his glory: And before him shall be gathered all nations: and he shall separate them one from another, as a shepherd divideth his sheep from the goats” (Matthew 25:31-32)

For the seventh and final time he states also to the Laodiceans: do you have an ear anymore to hear?