“…and there was a rainbow round about the throne, in sight like unto an emerald.” ~ Revelation 4:3

Note: the the emerald stone was the fourth stone in the breastplate of the High Priest and it represented the tribe of Judah, the one our Lord Jesus Christ came out of.

From the beginning the rainbow was a symbol given by God himself representing his promise of mercy: 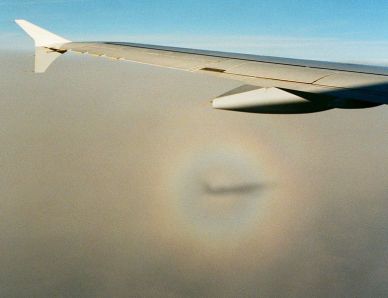 The reason there was a “rainbow round about the throne” is because God has always come with a cloud, and Jesus “cometh with clouds” (see Revelation 1:7), and clouds that are raining down are the ones that produce a rainbow. A rainbow from the viewpoint of the earth is like a half-circle, or a bow, but from above the cloud (if you have ever seen it in a cloud from a jet plane above the clouds) the bow is completely round. The Apostle John was spiritually “in the clouds” when he was in the spirit of worship, therefore he saw the throne of God in the clouds, and he saw a “round” rainbow rather than the typical one we see from the earth. “In the clouds” does not mean a physical cloud, but rather the “cloud of witnesses” (see Hebrews 12:1) made up of the people of God worshiping God! When people are in agreement from the heart, as the one church, worshiping God, there Jesus is right amongst them: “For where two or three are gathered together in my name, there am I in the midst of them.” (Matthew 18:20)

As also shown in this vision (see Revelation 4:5) when the “cloud of witnesses” gathers and God is there, there will be: lightning and thunder representing the judgement of God against all sin and false religion (including fake Christianity). And at the same time there will be the rainbow, showing that there is still mercy for those who will repent of sin and all false religion. A rainbow is produced when the light of the sun shines through the moisture or rain of a cloud – so the spiritual rainbow, (representing the promise of mercy to those who will fully repent of sin and allow Jesus to reign in their hearts) is produced when the light of the “Sun of Righteousness” (Malachi 4:2), who is Jesus, shines through.