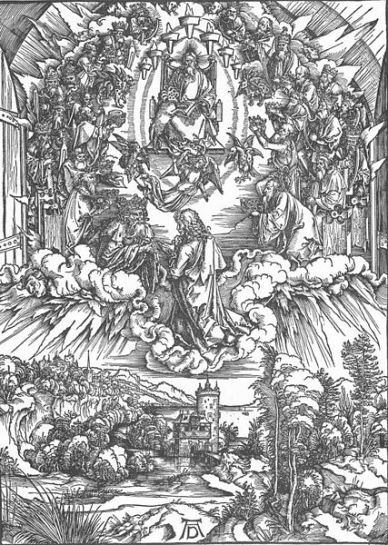 “And round about the throne were four and twenty seats: and upon the seats I saw four and twenty elders sitting, clothed in white raiment; and they had on their heads crowns of gold.” ~ Revelation 4:4

Here is the cloud spoken of in the comments and scriptures related to Revelation 4:3! The rainbow in verse three was seen “round about the throne” and here we see also “round about the throne” the four and twenty elders. These represent the “cloud of witnesses” throughout history where the rainbow is able to be visibly seen from the heavenly perspective! The rainbow was “in sight like unto an emerald” because the people of God are spoken of as being a “royal priesthood” (1 Peter 2:9) and emeralds are associated with the throne of the King. In this case the King is the King of kings who is also the King over the all the saved for he “hath made us kings and priests unto God and his Father” (Revelation 1:6)

Twelve of the twenty-four elders represent the Apostles of the Lamb. Jesus said unto his twelve Apostles:

“And I appoint unto you a kingdom, as my Father hath appointed unto me; That ye may eat and drink at my table in my kingdom, and sit on thrones judging the twelve tribes of Israel.” ~ Luke 22:29-30

These Apostles went forth preaching and establishing the Gospel that we know today, and in that context have established the Gospel foundations upon what true Christians believe, and that establish the foundation for the heavenly Jerusalem, the true church of God:

“James, a servant of God and of the Lord Jesus Christ, to the twelve tribes which are scattered abroad, greeting.” ~ James 1:1

For a true Christian is actually a true spiritual Jew and a spiritual Israelite: 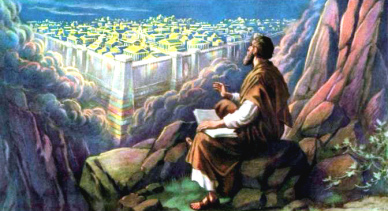 These also have a key role in the spiritual, heavenly Jerusalem “that great city, the holy Jerusalem, descending out of heaven from God” (Revelation 21:10). They represent the twelve gates and the twelve angels at the gates to the city of God, the church of God. The gates to a city in Bible times were the places where judgement went forth, and the angels represent the messengers for that judgment:

So not only are the twelve Apostles sitting on thrones with Jesus judging by the Gospel, but also all the true people of God:

Note: Remember how “the Lord cometh”? “Behold, he cometh with clouds” (Revelation 1:7) The cloud represents the saved in the “cloud of witnesses.”
These elders are all dressed in white raiment because “…fine linen, clean and white: for the fine linen is the righteousness of saints.” (Revelation 19:7-8) And they have crowns on because they are not only holy priests “Let thy priests be clothed with righteousness; and let thy saints shout for joy” (Psalms 132:9), but they are also kings! “…hath made us kings and priests unto God and his Father” (Revelation 1:6)

Will you sit round about the throne of God and worship the King of kings?