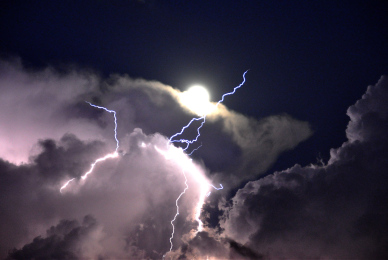 “And out of the throne proceeded lightnings and thunderings and voices: and there were seven lamps of fire burning before the throne, which are the seven Spirits of God.” ~ Revelation 4:5

Here is the result of the cloud spoken of previously in the comments and scriptures related to Revelation 4:3!

The throne of God exists in the clouds. It is the “cloud of witnesses” where people are gathered together with one true pure heart, and in one name to adore and worship God. When the true saints of God gather to worship this way, from the very throne of their hearts there proceeds a testimony and a sounding out of the true message that has the effect of “lightnings and thunderings” upon both the saved and unsaved.

Lightning is the bright and powerful light of Almighty God and his Gospel when it is first received! When the Apostle Paul was converted on the road to Damascus, he was blinded by the light of Jesus Christ from heaven! 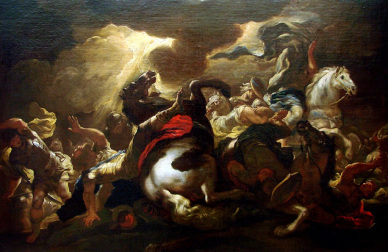 And so we see that the light we have received here on earth originated from the source of all light: God and his son Jesus Christ:

“Now when Jesus had heard that John was cast into prison, he departed into Galilee; And leaving Nazareth, he came and dwelt in Capernaum, which is upon the sea coast, in the borders of Zabulon and Nephthalim: That it might be fulfilled which was spoken by Esaias the prophet, saying, The land of Zabulon, and the land of Nephthalim, by the way of the sea, beyond Jordan, Galilee of the Gentiles; The people which sat in darkness saw great light; and to them which sat in the region and shadow of death light is sprung up. From that time Jesus began to preach, and to say, Repent: for the kingdom of heaven is at hand.” ~ Matthew 4:12-17

Thundering is what sounds out after the lightning. It is a report of a past happening: a lightning strike! Thunder represents the “voices” sounding out the Gospel. The voices rejoicing and in the spirit of worship. The voices of those who have received and accepted the true and powerful light of Jesus Christ:

“And he ordained twelve, that they should be with him, and that he might send them forth to preach,… …And James the son of Zebedee, and John the brother of James; and he surnamed them Boanerges, which is, The sons of thunder” ~ Mark 3:14 & 17

When Jesus cries out the revelation of his Word, thunders and voices follow:

“Hear attentively the noise of his voice, and the sound that goeth out of his mouth. He directeth it under the whole heaven, and his lightning unto the ends of the earth. After it a voice roareth: he thundereth with the voice of his excellency; and he will not stay them when his voice is heard.” ~ Job 37:2-4

The effect of thunder is also what the Lord wants people to feel so that they will realize their wickedness and turn from it:

“Is it not wheat harvest to day? I will call unto the LORD, and he shall send thunder and rain; that ye may perceive and see that your wickedness is great, which ye have done in the sight of the LORD, in asking you a king. So Samuel called unto the LORD; and the LORD sent thunder and rain that day: and all the people greatly feared the LORD and Samuel.” ~ 1 Samuel 12:17-18

“And it came to pass on the third day in the morning, that there were thunders and lightnings, and a thick cloud upon the mount, and the voice of the trumpet exceeding loud; so that all the people that was in the camp trembled.” (Exodus 19:16)

Have you seen the great light of Jesus Christ? What have you done with it? Have you ever heard and felt the great thundering of the true gospel as it is preached with the anointing of the Lord? Have you responded and asked for forgiveness of your sins and forsaken them? If you have never seen or heard, you need to seek Jesus Christ for the place where he is present and where his gospel is thundered out in truth! You will find people there who are delivered from sin, rejoicing and praising God in true holiness and unity! A mighty cloud of witnesses! The throne of Jesus Christ on earth!