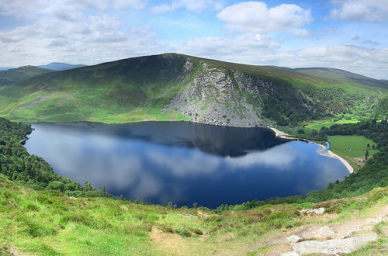 “And before the throne there was a sea of glass like unto crystal…” ~ Revelation 4:6

Here it states that the “sea of glass” was “before the throne” of God. In Revelation verse 5 (in a previous post: “Is the Holy Spirit of God Revealing Jesus to Your Heart”) we already mentioned that “before the throne” was the Spirit of God, burning as a lamp within the seven candlesticks, or churches. But the candlestick church is fed by more than just the Spirit of God – there are actually two anointed ones that “stand by the LORD of the whole earth” to feed the church. One of them is the “word of the Lord” and the other is “my spirit saith the Lord of hosts”. (see Zechariah 4:6) These both have been “anointed” to stand before God who is on the throne:

“Then answered I, and said unto him, What are these two olive trees upon the right side of the candlestick and upon the left side thereof? And I answered again, and said unto him, What be these two olive branches which through the two golden pipes empty the golden oil out of themselves?And he answered me and said, Knowest thou not what these be? And I said, No, my lord. Then said he, These are the two anointed ones, that stand by the LORD of the whole earth.” ~ Zechariah 4:11-14

But, one might say, what was before the throne was a “sea of glass”. The word of God is described in scripture as a type of spiritual looking glass where you can look into it and see your true spiritual reflection. In other words, when you can look into the word with an honest heart, it will show you what you look like to God – that is why it is described as being before God and his throne. When you look at yourself that way, with a judgement day honest heart, (the same way you will have to on the final day when everyone stands before God and his final judgement seat,) you will then truly see yourself as you are!

“But be ye doers of the word, and not hearers only, deceiving your own selves. For if any be a hearer of the word, and not a doer, he is like unto a man beholding his natural face in a glass: For he beholdeth himself, and goeth his way, and straightway forgetteth what manner of man he was. But whoso looketh into the perfect law of liberty, and continueth therein, he being not a forgetful hearer, but a doer of the work, this man shall be blessed in his deed.” ~ James 1:22-25

But of course, it takes the Spirit of God, along with the Word to fully see ourselves – that is why in Revelation verse 5 we also see the seven lamps of the church “burning before the throne.” This is also why in Revelation 15:2 we see those who have victory over all the deceptions of the devil standing on a “sea of glass mingled with fire.” They can stand there because the fire of the Spirit of God, and a love for the Word of God is reigning in their hearts. They are free and rejoicing in the liberty that they have before almighty God because they are in the true, spiritually pure image of God himself!

What image do you have? Are you obediently standing clear on the Word of God with the burning love of the Holy Spirit within?