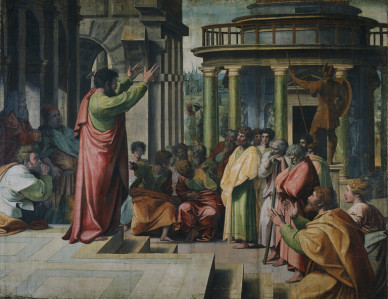 “…and in the midst of the throne, and round about the throne, were four beasts full of eyes before and behind.” ~ Revelation 4:6

The better translation for the word “beasts” here is the original meaning which is “a live thing.” These same creatures are described by the prophet Ezekiel as “living creatures.”

These are not the characteristics of a typical beast. But rather they are described here in Revelations, and in Ezekiel, and in Isaiah as: leaders in whole heart-ed worship of the Almighty. “Fiery” ministers proclaiming the “glory of the Lord”, and “chariots of God” moving under the direction and purpose of the Lord of Hosts.

This is the way that the Hebrew writer described the ministers of the Lord: the angel/messengers sent to preach the gospel.

“And of the angels he saith, Who maketh his angels spirits, and his ministers a flame of fire.” ~ Hebrews 1:7

The word “angel” in the original text translates as “messenger” – one sent by the Lord to proclaim his word. By the anointing of the Holy Spirit, a true minister is to be as the eyes of the Lord, searching out the hidden things of the heart.

Do you have a true minister of the Lord to preach to you? One who under obedience and the direction of the Spirit of God will preach the truth to search out the hidden things within your heart? Or have you chosen a “make you feel good” minister? One who will tell you that you can continue in your sins and still make heaven?