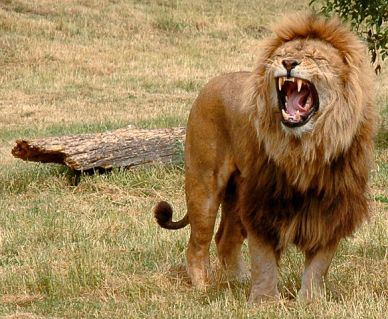 “And the first (living creature) beast was like a lion…” ~ Revelation 4:7

First let us consider the one with the face of a lion. Did you know that God gives his true ministry the boldness of a lion?

“The wicked flee when no man pursueth: but the righteous are bold as a lion.” ~ Proverbs 28:1

“And now, Lord, behold their threatenings: and grant unto thy servants, that with all boldness they may speak thy word, By stretching forth thine hand to heal; and that signs and wonders may be done by the name of thy holy child Jesus. And when they had prayed, the place was shaken where they were assembled together; and they were all filled with the Holy Ghost, and they spake the word of God with boldness.” ~ Acts 4:29-31

In a Holy Ghost anointed ministry, there is boldness like unto a lion! But note, the devil has a ministry also. And he anoints them to be as vicious and threatening as a lion. His ministry was bold to accuse and plot against Jesus. His ministry is still working the same way to resist and destroy the influence of a true ministry. Satan’s ministering angels will eventually put down and attack anyone who comes around that wants to fully obey the Lord in holiness and truth. But we are to resist this type of false ministerial threat by being steadfast in the true faith, and by being willing to suffer for the gospel.

“Be sober, be vigilant; because your adversary the devil, as a roaring lion, walketh about, seeking whom he may devour: Whom resist stedfast in the faith, knowing that the same afflictions are accomplished in your brethren that are in the world. But the God of all grace, who hath called us unto his eternal glory by Christ Jesus, after that ye have suffered a while, make you perfect, stablish, strengthen, settle you. To him be glory and dominion for ever and ever. Amen.” ~ 1 Peter 5:8-11

What kind of lion is ministering to you today? Can you discern the difference in the lions?