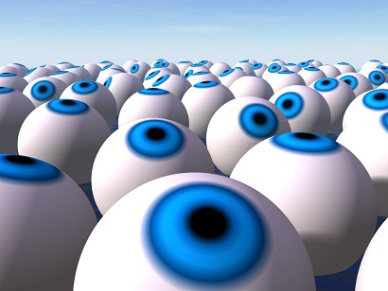 “And the four beasts had each of them six wings about him; and they were full of eyes within: and they rest not day and night, saying, Holy, holy, holy, LORD God Almighty, which was, and is, and is to come.” ~ Revelation 4:8

As stated in previous posts, these creatures represent the true ministers of God. Notice that it states “they were full of eyes within.” They are described also in Ezekiel as being covered with eyes.

The eyes represent the ability of the Spirit of God to see all things. So it is only natural that these creatures of Holy Ghost fire should also be shown as having the ability to see many things by the anointing of that same Spirit.

It is by these Holy Spirit directed eyes, these living creatures, who represent a true ministry, are able to minister the Word of God to needs that are unseen to the human eye.

The Word of God, preached under the anointing of the Holy Ghost, has the eyes to see clearly right down into the very depths of the heart and soul!

“For the word of God is quick, and powerful, and sharper than any twoedged sword, piercing even to the dividing asunder of soul and spirit, and of the joints and marrow, and is a discerner of the thoughts and intents of the heart. Neither is there any creature that is not manifest in his sight: but all things are naked and opened unto the eyes of him with whom we have to do.” ~ Hebrews 4:12-13

Do you have a true preacher ministering to your soul? Or have you instead chosen one to speak only things that will make you feel good with the hidden sins within your heart?

“Which say to the seers, See not; and to the prophets, Prophesy not unto us right things, speak unto us smooth things, prophesy deceits” ~ Isaiah 30:10