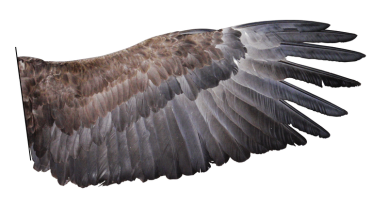 “And the four beasts (from a word meaning “living creatures”) had each of them six wings about him ; and they were full of eyes within: and they rest not day and night, saying, Holy, holy, holy, Lord God Almighty, which was, and is, and is to come.” ~ Revelation 4:8

These winged creatures represent a true ministry and have a key part in leading true unity and worship. For God’s will for his people is that they would be fitly joined and compacted together in love, with God being worshiped above them all. See Ephesians 4:1-6 & 16

But what is necessary for this love to work like it should?

In many places in the Old Testament and in Revelations, the ministry is represented by these Cherubim (or living servant creatures) who worship God and that lead the people in the proper service and worship of Almighty God. They are also described as creatures of fire, representing the anointing of the Spirit of God.

Ezekiel gives us a vision of these winged creatures and of their role in making this true unity work:

They had the likeness of a man because in reality they are, and they are subject to human limitations.

When you read on you will see that their wings were joined one to another. Think about that! You cannot flap your own wings and keep them joined. Therefore in order to move, they must wait upon the Word and Spirit of God to lift the wings to fly!

These creatures, represent the true ministry of Jesus Christ who do not move under the strength of their own opinion and personality. They are humble and are tender towards their fellow ministers, and they have a devoted love and care towards the flock they are responsible for. They must be completely submitted to the Spirit of God for their direction if they are to stay joined at the wings! Flapping their own wings always causes a division in the church and a disrespect for Almighty God who rides upon the joined together wings!

“And the cherubims lifted up their wings, and mounted up from the earth in my sight: when they went out, the wheels also were beside them, and every one stood at the door of the east gate of the Lord’s house; and the glory of the God of Israel was over them above.” ~ Ezekiel 10:19 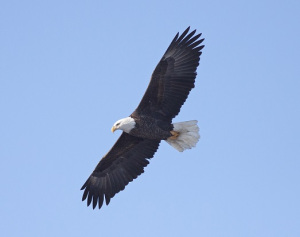 One of the likenesses of the cherubim was that of an eagle. This likeness represents not only the swiftness of the gospel that is preached, but it also shows by other scripture that they must not flap their wings. They must spread their wings and mount up on high by the wind of the Spirit of God lifting their wings! Like how an eagle does in a storm.

“Even the youths shall faint and be weary, and the young men shall utterly fall: But they that wait upon the Lord shall renew their strength; they shall mount up with wings as eagles; they shall run, and not be weary; and they shall walk, and not faint. ~ Isaiah 40:30-31

Note: in a storm or strong wind an eagle can simply spread its wings, and it will begin to rise above. Even all the way above the winds of a hurricane! If they flap their wings to rise in a storm, they would eventually grow weary and faint. 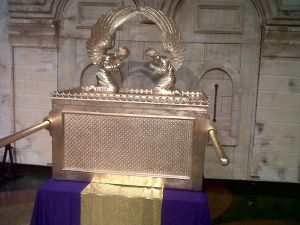 This pattern of cherubim wings is repeated in the old Testament tabernacle where their wings touched wing to wing over the mercy seat. (See Exodus 25:18-22, 1 Kings 6:27, and 2 Chronicles 3:10-13)

In 1 Chronicles 28:18 David called it the “chariot of the cherubim” where they faced each other with wings spread over. This is the tabernacle representation of the chariot of God where God’s presence abides above the mercy seat in the holy place of the tabernacle.

“The chariots of God are twenty thousand, even thousands of angels: the Lord is among them, as in Sinai, in the holy place.” (Psalms 68:17)

“For, behold, the LORD will come with fire, and with his chariots like a whirlwind, to render his anger with fury, and his rebuke with flames of fire. For by fire and by his sword will the LORD plead with all flesh: and the slain of the LORD shall be many.” (Isaiah 66:15-16)

All these illustrations and principles that are represented by the cherubim show the great responsibility the ministry has. They are held accountable for preaching only God’s Word, and for holding the church together. They accomplish this by waiting on God and his Holy Spirit, and by supporting the throne of God by their wings that are joined together!

It is important for wings to stay stretched up and joined together because: God rides and walks upon the “wings of the wind”

Note: In Revelation 18:2 a false ministry is described as a “cage of hateful birds.” These cannot stay attached at the wings, because it is their nature to flap their own wings. If they were joined, they would tear each other apart. Therefore, they must be “caged” by some kind of man rule to be able to stay together.

Important: in Ezekiel’s vision of the chariot there is no human designed hardware holding the chariot together. It is held together only by the Spirit of God, and by the wings upholding the throne of God!

Like we have already seen in Revelation, the cherubim in Ezekiel also have four faces:

They go together, and they only go under the direction of the Holy Spirit. They don’t turn themselves. They must keep their wings up and attached to catch the direction of God’s Word and his Spirit. That is all that they must move by!

But notice: this chariot also has wheels. The wheels represent the sheep that the ministers are responsible for ministering to. Notice how dependent the wheels are upon them!

The ministry can’t do the work of God alone, they need wheels! What is the chariot without wheels? (A car today is not worth much without wheels.)

What are the wheels without the chariot? Without being connected to the chariot, they can only keep momentum to go anywhere by rolling downhill! This is exactly what happens when people are not spiritually led by a true minister of God. They just keep going downhill, further into selfishness and sin!

Note: The wheels are at their sides, not at their throats, nor under their feet. There is an equality and a love and care that keeps them at their sides!

Wheels are where the “rubber meets the road” – it’s the proof of a true ministry – the existence of sheep, the fruit of a ministers labors. The Apostle Paul told us so:

Wheels cannot be kept in a balance rolling at the side of only one living creature – unless that living creature stays joined together to the others at the wings! Whoever heard of a chariot having only one wheel! Whoever heard of the church being only one congregation. The chariot of God also represents the balance that true unity produces. And this is only possible if the ministry stays attached at the wings!

A wheel is used to describe the people of God because:

1. Everyone has a responsibility in working and pulling together to form a wheel – if you are missing a part of a wheel, you’ll feel the difference as you roll down the road- even if the road is very smooth.

2. The roundness of a wheel creates a strong and balanced structure for enduring the difficulty of travel that is necessary to reach souls!

“…and they four had one likeness: and their appearance and their work was as it were a wheel in the middle of a wheel.” ~ Ezekiel 1:16

“And he that sat was to look upon like a jasper and a sardine stone: and there was a rainbow round about the throne, in sight like unto an emerald. And round about the throne were four and twenty seats: and upon the seats I saw four and twenty elders sitting, clothed in white raiment; and they had on their heads crowns of gold.” ~ Revelation 4:3-4

In an earlier post I explained how that in the view from heaven, above the clouds, that rainbows appear completely round in the clouds. This can be verified from a plane flying above a rain cloud. Of course the rainbow has from the days of Noah and the flood represented the extended mercy of God. And as stated in an earlier post, the twenty-four elders represent the key elders of Israel in both the Old Testament and the New Testament: the twelve tribes and the twelve Apostles. Consequently the twenty-four elders represent all the people of God in every age of time. Consequently the wheels represent the whole camp of the saints when they are attached to the cherubim who represent the ministry. They also represent the rainbow, or the love and mercy God shows to a lost world through his people!

“I beheld till the thrones were cast down, and the Ancient of days did sit, whose garment was white as snow, and the hair of his head like the pure wool: his throne was like the fiery flame, and his wheels as burning fire.” ~ Daniel 7:9

The wings of the cherubim are also very noisy when they are joined together. This is because the Word and the Spirit of God is moving the wings and the wheels!

Note: that this voice in the wings is within the context of the messenger of God delivering God’s Word to the people anointed by the Spirit of God. This is the way that God sends his true angel/messengers. First they stand still to get direction from God. Then second, joined by the wings, the Word and Spirit moves the messengers, and the wheels move with them!

“And go, get thee to them of the captivity, unto the children of thy people, and speak unto them, and tell them, Thus saith the Lord God ; whether they will hear, or whether they will forbear. Then the spirit took me up, and I heard behind me a voice of a great rushing, saying , Blessed be the glory of the Lord from his place. I heard also the noise of the wings of the living creatures that touched one another, and the noise of the wheels over against them, and a noise of a great rushing. So the spirit lifted me up, and took me away, and I went in bitterness, in the heat of my spirit; but the hand of the Lord was strong upon me.” ~ Ezekiel 3:11-14

The rushing in the wings of the living creatures is God’s Word and his Spirit that the “joined wings” must wait upon!

This rushing into the wings of the chariot and wheels is what happened on the day of Pentecost.

“And when the day of Pentecost was fully come, they were all with one accord in one place. And suddenly there came a sound from heaven as of a rushing mighty wind, and it filled all the house where they were sitting. And there appeared unto them cloven tongues like as of fire, and it sat upon each of them.” ~ Acts 2:1-3

So the question for all of us is: are you part of this vision? Or is your spiritual wheel (fellowship) rolling further down hill as you don’t have a true minister to lead and lift you higher? Or are you a minister flapping your own wings and becoming more spiritually weary as time goes on? You either are part of this vision from Ezekiel, or you’re not. There is no “middle vision”!

“Then did the cherubim lift up their wings, and the wheels beside them; and the glory of the God of Israel was over them above.” ~ Ezekiel 11:22