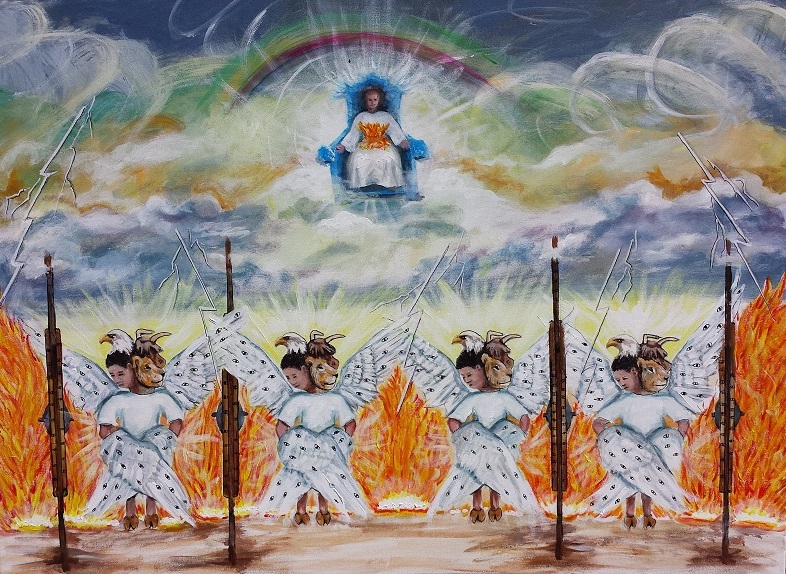 Do you have a true vision for the church?
Ezekiel’s vision of the chariot of God is one of God’s faithful visions for the church. Here are four reasons why:

It is held together by the Spirit of God. And the cherubim, who represent the ministry, carefully fly in unity being held together at the wing tips.

Consequently they have the characteristics of: the boldness of a lion, the sacrificial life of a calf, the weakness of a man, and the wings of an eagle with the ability to rise above and wait on the Lord. And by the way, because they are attached at the wings, they cannot flap their own wings because that would rip them apart from one another. They must wait on the rushing mighty wind of the Spirit of God to fill their wings, so they can soar as one, together!
This shows us that the relationship between the true ministry is a tender one of heartfelt concern and care for one another. This relationship can only be held together by waiting on the Spirit of God to move them and the chariot! Therefore they must exercise great patience, long suffering, and compassion towards one another.

They must be this way, because the throne of God is resting upon their wings!

If they flap their own wings (express their own opinion), they would break the attachment to one another, and disrespect the very throne of God! In addition, they would begin to beat upon the wheels, which represent the people of God they are supposed to minister to.
They highly respect how the Holy Spirit chooses to work differently through each other. This is because they know that God is over them all, and only he makes the decisions about how to use each minister, and the people they minister to. Therefore they accept these differences that God has ordained by his Spirit.

They have one heart to do what profits the whole chariot, so together they must wait on the Spirit of God to fill their wings so they can maintain unity and move together as one. They know it is our Lord’s deepest desire for their oneness in the chariot, because when the world sees the oneness, they will believe!

“Neither pray I for these alone, but for them also which shall believe on me through their word; That they all may be one; as thou, Father, art in me, and I in thee, that they also may be one in us: that the world may believe that thou hast sent me. And the glory which thou gavest me I have given them; that they may be one, even as we are one: I in them, and thou in me, that they may be made perfect in one; and that the world may know that thou hast sent me, and hast loved them, as thou hast loved me.” ~ John 17:20-23

This is also why they are called creatures of fire, because this unity is only possible by the burning love of the Holy Ghost being their heart’s complete motivation and direction.

They are not below the cherubim, nor are they at their throats. But compassionately, as a father with his loved children, they are at their sides. A heart to heart relationship. A wheel without a vehicle cannot travel far without falling to its side, unless it is going fast downhill! Many a congregation today is fallen into deception, or is traveling downhill fast into compromise with many sinful things, all because they don’t have a true minister that cares about them.
Also note: the real cherubim truly care about more than one wheel, because through the Holy Spirit, they are all one chariot and have a heart concern for all the church! And the ministry is greatly dependent upon the wheels, because how can a chariot traverse and impact the world without wheels? It takes Holy Spirit filled congregations to bring about a large revival!

Because when all is in order and the Spirit of God is allowed to hold the chariot together and to move it, then people will witness the actual presence of God. They will see almighty God over it all, and in control of it all!

The attached picture is an artist’s best attempt at a physical representation of Ezekiel’s vision of the chariot of God (in the first chapter of Ezekiel). Ezekiel’s vision is a spiritual one that represents the relationship between God’s people and his true ministry, and also with God himself. If you read the vision in Ezekiel, you come to understand why a completely accurate drawing is impossible. Spiritual things do not fit within the constraints of the physical world, nor into a painting. The wings in this picture are not completely accurate. The wings should reach above the wheels, and join together below the throne of God. But this painting I believe is still one of the best because it clearly depicts other important characteristics of the chariot of God, which are also reflected in God’s true church!
Note: the things between the cherubim represent large wheels full of eyes. They are not wooden posts.
Credit must be given to two artists for this painting: Diana Licon and Jessie Franco. For both of them it was a labor of love for the Lord and for his great purpose.