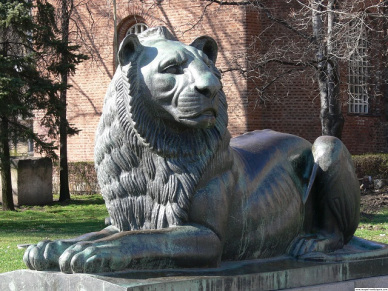 “And one of the elders saith unto me, Weep not: behold, the Lion of the tribe of Juda, the Root of David, hath prevailed to open the book, and to loose the seven seals thereof.” ~ Revelation 5:5

In fulfillment of Old Testament prophecy, Jesus was born of the tribe of Judah.

“And thou Bethlehem, in the land of Judah, art not the least among the princes of Judah: for out of thee shall come a Governor, that shall rule my people Israel.” ~ Micah 5:2

And Jesus was of the lineage of King David.

“I Jesus have sent mine angel to testify unto you these things in the churches. I am the root and the offspring of David, and the bright and morning star.” ~ Revelation 22:16

“Judah is a lion’s whelp: from the prey, my son, thou art gone up: he stooped down, he couched as a lion, and as an old lion; who shall rouse him up? The sceptre shall not depart from Judah, nor a lawgiver from between his feet, until Shiloh come; and unto him shall the gathering of the people be.” ~ Genesis 49:9-10

Note: It is amazing that the prophecies concerning the coming of Christ are very many (like the one above) and go back thousands of years!

This thought of a “lion” is associated with kings describing their power in executing judgement:

Consequently, this notion of a lion is also used to describe the authority of God and to show God’s boldness and fearlessness in executing his authority.

“For thus hath the LORD spoken unto me, Like as the lion and the young lion roaring on his prey, when a multitude of shepherds is called forth against him, he will not be afraid of their voice, nor abase himself for the noise of them: so shall the LORD of hosts come down to fight for mount Zion, and for the hill thereof.” (Isaiah 31:4)

The lion is also associated with prophecy and those who prophesy.

“The lion hath roared, who will not fear? the Lord GOD hath spoken, who can but prophesy?” ~ Amos 3:8

And so the lion is also used to describe God’s ministry who speak the gospel of Jesus Christ.

Spiritual Jerusalem is the place where God dwells among the saved here on earth; and he also roars from there!

Jesus is that bold Lion that “prevailed to open the book, and to loose the seven seals thereof”. Because of this, he was persecuted as a Lamb, but he still continued and prevailed boldly!

“And he came to Nazareth, where he had been brought up: and, as his custom was, he went into the synagogue on the sabbath day, and stood up for to read. And there was delivered unto him the book of the prophet Esaias. And when he had opened the book, he found the place where it was written, The Spirit of the Lord is upon me, because he hath anointed me to preach the gospel to the poor; he hath sent me to heal the brokenhearted, to preach deliverance to the captives, and recovering of sight to the blind, to set at liberty them that are bruised, To preach the acceptable year of the Lord. And he closed the book, and he gave it again to the minister, and sat down. And the eyes of all them that were in the synagogue were fastened on him. And he began to say unto them, This day is this scripture fulfilled in your ears. And all bare him witness, and wondered at the gracious words which proceeded out of his mouth. And they said, Is not this Joseph’s son?… …And all they in the synagogue, when they heard these things, were filled with wrath, And rose up, and thrust him out of the city, and led him unto the brow of the hill whereon their city was built, that they might cast him down headlong.” ~ Luke 4:16-29

The question is: how many times more will the Lion of the tribe of Judah roar out his warning before he executes his judgement? Have we yet heeded his mighty roar?