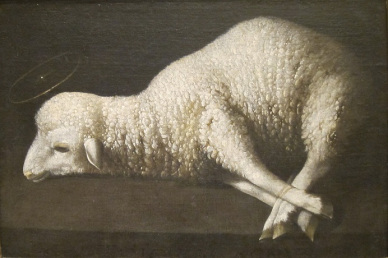 “And I beheld, and, lo, in the midst of the throne and of the four beasts, and in the midst of the elders, stood a Lamb as it had been slain, having seven horns and seven eyes, which are the seven Spirits of God sent forth into all the earth.” ~ Revelation 5:6

Jesus is the “Lamb as it had been slain” because he is the sacrifice for our sins! Under the Old Testament Law they were required by God to sacrifice a lamb that was without spot or blemish. At that time God required the lamb to be slain and its blood poured out in order for one’s sins to be forgiven. God required it this way as a type of what was to come with Christ Jesus:

“Forasmuch as ye know that ye were not redeemed with corruptible things, as silver and gold, from your vain conversation received by tradition from your fathers; But with the precious blood of Christ, as of a lamb without blemish and without spot” ~ I Peter 1:18-19

Jesus was that special Lamb sent out of heaven from God, without spot or blemish, without being guilty of any sin, that was sacrificed for us on the cross to forgive and take away our sins forever:

“The next day John seeth Jesus coming unto him, and saith, Behold the Lamb of God, which taketh away the sin of the world.” ~ John 1:29

Many prophecies from the Prophets hundreds of years before spoke of the Lamb of God, Jesus Christ.

“He was oppressed, and he was afflicted, yet he opened not his mouth: he is brought as a lamb to the slaughter, and as a sheep before her shearers is dumb, so he openeth not his mouth.” (Isaiah 53:7 & Acts 8:32)

“And he said unto them, These are the words which I spake unto you, while I was yet with you, that all things must be fulfilled, which were written in the law of Moses, and in the prophets, and in the psalms, concerning me. Then opened he their understanding, that they might understand the scriptures, And said unto them, Thus it is written, and thus it behoved Christ to suffer, and to rise from the dead the third day: And that repentance and remission of sins should be preached in his name among all nations, beginning at Jerusalem.” ~ Luke 24:44-47

“And they said one to another, Did not our heart burn within us, while he talked with us by the way, and while he opened to us the scriptures?” ~ Luke 24:32

It is because the emphasis upon his sacrificial lamb characteristic is paramount to revealing the true Jesus! Our Savior in love was a sacrificial lamb, and as a key part of our life of worship and love towards Jesus, we are also to be persecuted and follow in his footsteps. We also are as “sheep for the slaughter” while we labor for his purpose and glory:

“Who shall separate us from the love of Christ? shall tribulation, or distress, or persecution, or famine, or nakedness, or peril, or sword? As it is written, For thy sake we are killed all the day long; we are accounted as sheep for the slaughter. Nay, in all these things we are more than conquerors through him that loved us. For I am persuaded, that neither death, nor life, nor angels, nor principalities, nor powers, nor things present, nor things to come, Nor height, nor depth, nor any other creature, shall be able to separate us from the love of God, which is in Christ Jesus our Lord.” ~ Romans 8:35-39

True Love is so much deeper than “what’s in it for me” and “I’ll scratch your back if you scratch mine.” Jesus revealed true love by his personal sacrifice he gave for us; even though we did not deserve it. This love shown to us is just the beginning of his love revelation. Next he wants us to be part of that love revelation to others!