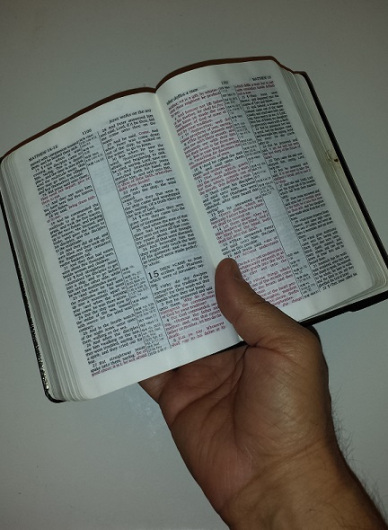 “And he came and took the book out of the right hand of him that sat upon the throne.” ~ Revelation 5:7

Again, as stated in previous posts, the only one that God the Father counts as worthy to take the book, is his only begotten Son, the Lamb of God!

“For the Father judgeth no man, but hath committed all judgment unto the Son: That all men should honour the Son, even as they honour the Father. He that honoureth not the Son honoureth not the Father which hath sent him. Verily, verily, I say unto you, He that heareth my word, and believeth on him that sent me, hath everlasting life, and shall not come into condemnation; but is passed from death unto life.” ~ John 5:22-24

The Heavenly Father’s heart is at his right hand where Jesus is.

God’s heart is first for his Son because Jesus in love was willing to obey the Father’s will and come down to earth to teach, suffer and die for all mankind. He that honors the Son of God, honors the heavenly Father. And the Father has given the greatest honor to Jesus Christ, by placing him at his own right hand with full authority to reveal and judge the world by the Word of God.

“This Jesus hath God raised up, whereof we all are witnesses. Therefore being by the right hand of God exalted, and having received of the Father the promise of the Holy Ghost, he hath shed forth this, which ye now see and hear. For David is not ascended into the heavens: but he saith himself, The Lord said unto my Lord, Sit thou on my right hand, Until I make thy foes thy footstool. (see Psalms 110:1) Therefore let all the house of Israel know assuredly, that God hath made the same Jesus, whom ye have crucified, both Lord and Christ.” ~ Acts 2:32-36

When Jesus resurrected back into heaven, the first place he went was to the right hand of his heavenly Father.

“So then after the Lord had spoken unto them, he was received up into heaven, and sat on the right hand of God. And they went forth, and preached everywhere, the Lord working with them, and confirming the word with signs following. Amen.” ~ Mark 16:19-20

Those who had a vision of Christ in heaven also saw him at the right hand of the Father.

For this reason the Apostles boldly told the earthly leaders of their day that Jesus had more authority than those leaders.

“Then Peter and the other apostles answered and said, We ought to obey God rather than men. The God of our fathers raised up Jesus, whom ye slew and hanged on a tree. Him hath God exalted with his right hand to be a Prince and a Saviour, for to give repentance to Israel, and forgiveness of sins. And we are his witnesses of these things; and so is also the Holy Ghost, whom God hath given to them that obey him.” ~ Acts 5:29-32

Earthly authorities (religious or otherwise) have no authority in God’s eyes if that same authority is condemning a true Christian for simply being faithful to Christ.

“Who is he that condemneth? It is Christ that died, yea rather, that is risen again, who is even at the right hand of God, who also maketh intercession for us.” ~ Romans 8:34

Consequently, true Christians are instructed to first place their hopes and affections in Christ above and not on people and things of this life.

“If ye then be risen with Christ, seek those things which are above, where Christ sitteth on the right hand of God. Set your affection on things above, not on things on the earth. For ye are dead, and your life is hid with Christ in God.” ~ Colossians 3:1-3

Because Jesus has this great authority, his one sacrifice has the power to not only forgive sins, but to break the power of sin completely!

“And every priest standeth daily ministering and offering oftentimes the same sacrifices, which can never take away sins: But this man, after he had offered one sacrifice for sins for ever, sat down on the right hand of God;” ~ Hebrews 10:11-12

Because he has broken the power of sin, we can continue to look to Jesus for that power to continue in Holy living against every temptation and opposition.

“Looking unto Jesus the author and finisher of our faith; who for the joy that was set before him endured the cross, despising the shame, and is set down at the right hand of the throne of God. For consider him that endured such contradiction of sinners against himself, lest ye be wearied and faint in your minds.” ~ Hebrews 12:2-3

The heavens and the earth are subject to Jesus’ authority. Are you and I also completely subject to Him in obedience to his Word? We better be!

“Who is gone into heaven, and is on the right hand of God; angels and authorities and powers being made subject unto him.” ~ 1 Peter 3:22