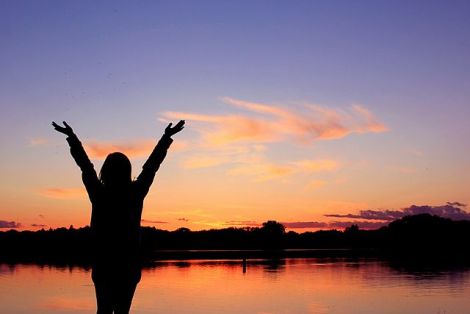 “And I beheld, and I heard the voice of many angels round about the throne and the beasts and the elders: and the number of them was ten thousand times ten thousand, and thousands of thousands;” ~ Revelation 5:11

This is a heavenly vision experienced while John was still just a man on earth. The revelation the prophet Daniel received while on earth was also of the same scene:

“I beheld till the thrones were cast down, and the Ancient of days did sit, whose garment was white as snow, and the hair of his head like the pure wool: his throne was like the fiery flame, and his wheels as burning fire. A fiery stream issued and came forth from before him: thousand thousands ministered unto him, and ten thousand times ten thousand stood before him: the judgment was set, and the books were opened.” ~ Daniel 7:9-10

In fact, the prophet Daniel’s revelation gives us some further insight into why the book (representing the book of all the scriptures in the Bible) needed to be opened. Understanding needs to be opened because the “judgement was set.” Jesus came that sin in the flesh would be condemned! Why? Because his sacrifice has taken away all excuses! Jesus has paid the price for us to be forgiven and freed from the power of sin and the devil!

“And ye know that he was manifested to take away our sins; and in him is no sin. Whosoever abideth in him sinneth not: whosoever sinneth hath not seen him, neither known him. Little children, let no man deceive you: he that doeth righteousness is righteous, even as he is righteous. He that committeth sin is of the devil; for the devil sinneth from the beginning. For this purpose the Son of God was manifested, that he might destroy the works of the devil. Whosoever is born of God doth not commit sin; for his seed remaineth in him: and he cannot sin, because he is born of God. In this the children of God are manifest, and the children of the devil…” ~1 John 3:5-10

Jesus came to cast down all thrones except God’s. That is why you only see one throne in this revelation. When no other throne exists, everyone is only worshiping the one true God, and that is why you see this heavenly host glorifying God.

In the “heavenly places in Christ Jesus” (Ephesians 2:6) and in God’s heaven (the final heavens) all are worshiping in perfect unity and purpose.

Yes, people on earth can spiritually join in with the angels in this heavenly host by worshiping and glorifying the Lord in the Spirit:

“And there were in the same country shepherds abiding in the field, keeping watch over their flock by night. And, lo, the angel of the Lord came upon them, and the glory of the Lord shone round about them: and they were sore afraid. And the angel said unto them, Fear not: for, behold, I bring you good tidings of great joy, which shall be to all people. For unto you is born this day in the city of David a Saviour, which is Christ the Lord. And this shall be a sign unto you; Ye shall find the babe wrapped in swaddling clothes, lying in a manger. And suddenly there was with the angel a multitude of the heavenly host praising God, and saying, Glory to God in the highest, and on earth peace, good will toward men. And it came to pass, as the angels were gone away from them into heaven, the shepherds said one to another, Let us now go even unto Bethlehem, and see this thing which is come to pass, which the Lord hath made known unto us.” ~ Luke 2:8-15

“After this I beheld, and, lo, a great multitude, which no man could number, of all nations, and kindreds, and people, and tongues, stood before the throne, and before the Lamb, clothed with white robes, and palms in their hands; And cried with a loud voice, saying, Salvation to our God which sitteth upon the throne, and unto the Lamb. And all the angels stood round about the throne, and about the elders and the four beasts, and fell before the throne on their faces, and worshiped God, Saying, Amen: Blessing, and glory, and wisdom, and thanksgiving, and honour, and power, and might, be unto our God for ever and ever. Amen. And one of the elders answered, saying unto me, What are these which are arrayed in white robes? and whence came they? And I said unto him, Sir, thou knowest. And he said to me, These are they which came out of great tribulation, and have washed their robes, and made them white in the blood of the Lamb. Therefore are they before the throne of God, and serve him day and night in his temple: and he that sitteth on the throne shall dwell among them. They shall hunger no more, neither thirst any more; neither shall the sun light on them, nor any heat. For the Lamb which is in the midst of the throne shall feed them, and shall lead them unto living fountains of waters: and God shall wipe away all tears from their eyes.” ~ Revelation 7:9-17

This still happens among the true worshipers of God today on earth. They, “of all nations, and kindreds, and people, and tongues” worship in one accord “clothed with white robes” which represents their new righteousness in Christ Jesus by having their sins washed away in the blood of the Lamb. And do those who have already gone on to the Lord, along with the angels in God’s heaven, stand still and just watch? No! Jesus himself said that

Yes, when we rejoice about salvation here on earth, heaven rejoices too!