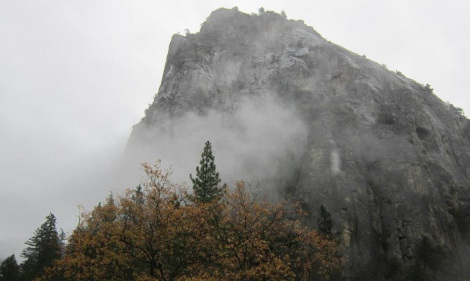 “And the heaven departed as a scroll when it is rolled together; and every mountain and island were moved out of their places. And the kings of the earth, and the great men, and the rich men, and the chief captains, and the mighty men, and every bondman, and every free man, hid themselves in the dens and in the rocks of the mountains; And said to the mountains and rocks, Fall on us, and hide us from the face of him that sitteth on the throne, and from the wrath of the Lamb: For the great day of his wrath is come; and who shall be able to stand?” ~ Revelation 6:14-17
These scriptures, and the ones preceding them concerning the opening of the sixth seal, all imply a great spiritual awakening and shaking! This happens when the Spirit of God moves through a humble and fully consecrated ministry to preach the full anointed truth!

“Whose voice then shook the earth: but now he hath promised, saying, Yet once more I shake not the earth only, but also heaven. And this word, Yet once more, signifieth the removing of those things that are shaken, as of things that are made, that those things which cannot be shaken may remain. Wherefore we receiving a kingdom which cannot be moved, let us have grace, whereby we may serve God acceptably with reverence and godly fear: For our God is a consuming fire.” ~ Hebrews 12:26-29

Revelation 6:14-17 quoted above shows a spiritual movement in the heavens and in the earth. God’s heaven is secure and safe, and does not need any shaking or removing. But the spiritual heavenly condition amongst those in the church on earth, does need shaking and a removing of contrary things to keep her pure from the defilement of men’s ideas, and the corruptions of Satan’s hypocrisy.

In Revelation 6:14-17 we see a vision where men are afraid of this spiritual shaking. They do not receive it for their benefit because they want to hold on to their own divided “Christian affiliations” of spiritual mountains and islands. But the true message is moving these mountains and islands “out of their places.” Therefore they seek “to hide” in the caves of their own spiritual ideas and doctrines that allow them to live in sin and still claim the name of Christ.
But the true people of God welcome the presence of God, and his powerful judgements against evil and hypocrisy.

“God is our refuge and strength, a very present help in trouble. Therefore will not we fear, though the earth be removed, and though the mountains be carried into the midst of the sea; Though the waters thereof roar and be troubled, though the mountains shake with the swelling thereof. Selah. There is a river, the streams whereof shall make glad the city of God, the holy place of the tabernacles of the most High. God is in the midst of her; she shall not be moved: God shall help her, and that right early. The heathen raged, the kingdoms were moved: he uttered his voice, the earth melted.” ~ Psalms 46:1-6

And this is why at the end of the scripture first quoted in Revelation 6:14-17, that those in fear of the Lord’s judgement say to themselves:

“For the great day of his wrath is come; and who shall be able to stand?” ~ Revelation 6:17

Are you able to stand the judgement of the pure Word of God without any mixture of men’s ideas or opinions?
Although there have been many spiritual revival awakenings throughout history, this particular one in the opening of the sixth seal shows more than just people getting saved. It also shows us that every spiritual “mountain and island were moved out of their places.” (Revelation 6:14) Mountains and islands tend to be very permanent things in the earth. Occasionally a great earthquake or volcanic eruption could shake them, but it would take something even greater to physically move them “out of their places.” So this spiritual movement can only be accomplished by God: and it moves things that would seem to be permanent.
People tend to think of the various “Christian denominations” as permanent things. But they are all temporary, because they were all created by man.
In the late 1800s God began to move on the hearts of many of his ministers that it was time again call the church together into one, separate from all the divisions and denominations that man had created throughout the centuries. This was a movement of Holy Spirit because it was not propagated by charismatic personalities, nor by a new doctrinal teaching. It happened as ministers fully consecrated themselves to holy living and to preaching the Word of God without any mixture of denominational teachings. Their message included:
Leave the Word alone. Die out to yourself and completely devote your life to God’s service. If you are saved and living sin free and faithful to the Lord, that makes you God’s child and that is the only membership you need. God places you in the church: not man nor the doctrines of man. We become part of the church by answering God’s call to holiness and by not creating our own identity by creeds and denominational hierarchal organization. The only head of the church is Christ, and the rest of us are just brothers and sisters in Christ with different gifts and responsibilities.
This movement of God’s Holy Spirit also began the call from Revelation chapter 18 for people to “come out of Babylon” or unfaithful “Christian religions” and to repent of all sin to live holy and true to Christ.
The movement began to grow, and as it grew many in the denominations of “Christianity” became alarmed and began to look for ways to self protect their organization and to continue to hide behind their false doctrines. Nothing could stand the clear judgement preaching of pure scripture anointed by the Holy Ghost. So they were “moved out of their places” and began to try new things they had not done before. Some of the new things the devil helped them to do to divert attention away from the truth:

Truly the denominations of “Christianity” were “moved out of their places” as they began to also gather to their master: Satan. This is nothing new as this was how it worked in the beginning when the church was first created by Jesus Christ. All the divided religious forces of the world (that even hated one another) would agree on one point: to resist Christ and his church.

If you have answered the call to “come out of Babylon” and taken your stand on living true and holy to Jesus Christ, what I have just described to you is not surprising. But if you have been deceived by the denominations of “Christianity” then this is a wake up call for you!
But what Revelation 6:14-17 is telling us is nothing new. For in the Old Testament the prophet used the same language to preach against the introduction of pagan practices into their worship.

“The high places also of Aven, the sin of Israel, shall be destroyed: the thorn and the thistle shall come up on their altars; and they shall say to the mountains, Cover us; and to the hills, Fall on us.” (Hosea 10:8)

And even our Lord and Savior used the same language when he described the deplorable religious condition of his day.

“And there followed him a great company of people, and of women, which also bewailed and lamented him. But Jesus turning unto them said, Daughters of Jerusalem, weep not for me, but weep for yourselves, and for your children. For, behold, the days are coming, in the which they shall say, Blessed are the barren, and the wombs that never bare, and the paps which never gave suck. Then shall they begin to say to the mountains, Fall on us; and to the hills, Cover us. For if they do these things in a green tree, what shall be done in the dry?” (Luke 23:27-31)

For if they do these things before the anointing of the Holy Spirit falls on the Apostles and disciples, what will they do when the anointed preaching of many shall begin?

“For the great day of his wrath is come; and who shall be able to stand?” ~ Revelation 6:17