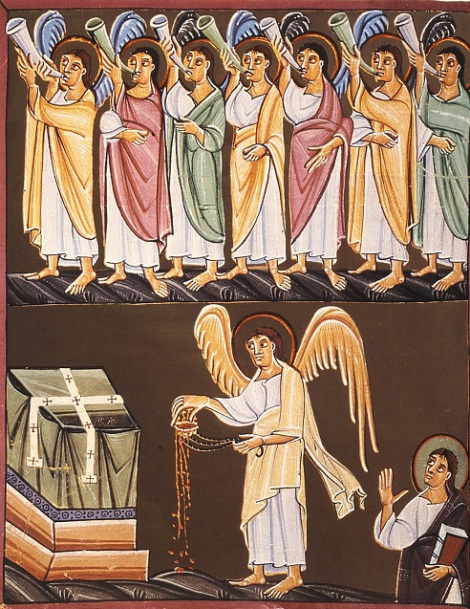 “And when he had opened the seventh seal, there was silence in heaven about the space of half an hour. And I saw the seven angels which stood before God; and to them were given seven trumpets.” ~ Revelation 8:1-2

The silence is broken when our High Priest, Jesus Christ “took the censer, and filled it with fire of the altar, and cast it into the earth: and there were voices, and thunderings, and lightnings, and an earthquake.” And once the silence was broken, then the immediate effect was “And the seven angels which had the seven trumpets prepared themselves to sound.”

Note the order of events: the angels were first given the trumpets: the revelation message to preach. But they were not able to properly prepare for sounding until the silence was broken by the actions of Jesus our High Priest. And, Jesus was not moved to cast in the coals of fire until all the ministers and saints were broken and humbly in agreement in prayer before the throne.

What we see is not a casual nor regular meeting. There is a real earnestness about the people in prayer that it is recognized as ascending up with the “prayers of all saints”. Those who see the need are all in agreement and in earnest about this need. (As I said in previous posts this picture is very similar to the morning and evening daily sacrifice of the Old Testament.)

I have heard it claimed by some that the silence of Revelation 8 was already broken in the USA because of a revelation of understanding that came to a seventh seal ministry. But it is evident that their understanding of how the silence is broken is incomplete. Silence is not broken by a revelation understood. It is broken by only Christ Jesus our High Priest; and that only after the sacrificial altar is in order!

We know that in the morning time of the Gospel day that the 120 were gathered in the upper room to offer themselves as one in sacrifice God. They were broken of their ideas and purposes, and they all were in one accord. Because their hearts were now properly prepared, Jesus, our High Priest, was able to take coals from off the altar (the burning love of the Spirit of God) and cast that burning love into the hearts of the Apostles and disciples.

The scene shown at the beginning of Revelation 8 reflects the Old Testament morning and evening sacrifice which was done exactly the same. We are now in the evening of the gospel day. So has a similar sacrifice happened in the USA that resembles the pattern and type and effect of the day of Pentecost? I’m afraid not yet. In general, the ministry is not ready.

It is the responsibility of the ministry as a whole to first lead the way in complete brokenness and consecrated oneness in sacrifice. Since the revival of the church in the late 1800s there has not been that kind of unity among all the ministry who have a knowledge of the truth. So why would the Lord have broken the silence since then with the ministry in the USA? We must be honest with ourselves and identify with where we are spiritually.

The beginning of Revelation 8 is a picture of a ministry lead people that are completely consecrating their lives and purposes to the will of God. So much is unity emphasized that those gathered around the altar of sacrifice are having their prayers gathered together with “the prayers of all saints.” (Revelation 8:3)

“And another angel came and stood at the altar, having a golden censer; and there was given unto him much incense, that he should offer it with the prayers of all saints upon the golden altar which was before the throne.” ~ Revelation 8:3

How can a ministry take part in prayer with all saints if they cannot do it with one another? So how could the silence be broken in the USA? Let all the ministry first humble themselves and be leaders in following the scriptures that teach us how to be reconciled! Before we can offer an acceptable sacrifice, we must first be reconciled with all the saved!

“Therefore if thou bring thy gift to the altar, and there rememberest that thy brother hath ought against thee; Leave there thy gift before the altar, and go thy way; first be reconciled to thy brother, and then come and offer thy gift.” ~ Matthew 5:23-24

In addition, the ministry must humbly respect the Holy Spirit’s work among each other. Too many have strong opinions centered around how the Holy Spirit works with them. So much so that they do not accept differences in: gifts, local administration, and in how others operate. (See 1 Corinthians the 12th chapter) Even though they know in their heart that there are other truly saved from sin people in other places; by their attitudes and actions they do not respect how the Holy Ghost has chosen in other places to administer: gifts, local administration, and different ways of operating.

Instead of having and practicing a loving care and concern for other ministers, they have no fear to express their opinions about the shortcomings of another minister. They forget that it was the “anointed” David that was so careful to respect and love the other one who was also “anointed”.

Many ministers today have also forgotten that the only example given in the Bible for a ministers meeting to resolve doctrinal issues, is found in Acts 15. In Acts 15 they stopped speaking their own opinion and listened to what the Holy Ghost was doing. Because when the Holy Spirit moves and saves and establishes souls anywhere, he has expressed an approval for those who minister there.

All ministers lack perfect understanding about something. But true ministers know complete deliverance from sin in their own hearts and lives, and they help others find this same truth. So the Holy Ghost accepts those ministers when they sincerely labor for the lost.

Many ministers know of a reformation song that contains a verse that goes like this: “we reach our hands in fellowship to every blood washed one.” But they don’t practice it as they make other teachings and issues a test of fellowship. How much longer do we believe God will long suffer with this kind of attitude! Dare we tempt God!

Do we care enough to listen to the Holy Spirit? Or does our opinion matter more? I have spoken about this in much more detail in an earlier post:

Will the ministry be broken so that the silence can be broken? Let us pray and fast that all would be humble and willing. There is not much time left to respond to what we know we should be doing!