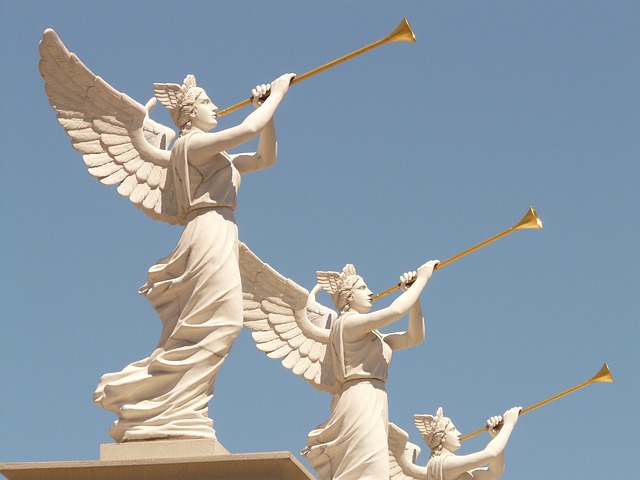 “And I saw the seven angels which stood before God; and to them were given seven trumpets.” ~ Revelation 8:2

The word “angel” in the original Greek means “messenger”. Most of the time the angel messengers referred to are people, and not just heavenly beings that only have a spirit. They are preachers full of the fire of the Holy Spirit in the message they deliver.

Specifically in the book of Revelation they are identified as men.

“And he measured the wall thereof, an hundred and forty and four cubits, according to the measure of a man, that is, of the angel.” ~ Revelation 21:17

A man who’s message from God would be so profound, that even an Apostle would be moved towards glorifying that man. But a true man of God will not allow anyone to worship him. He will direct them to only worship God!

“And I John saw these things, and heard them. And when I had heard and seen, I fell down to worship before the feet of the angel which shewed me these things. Then saith he unto me, See thou do it not: for I am thy fellowservant, and of thy brethren the prophets, and of them which keep the sayings of this book: worship God.” ~ Revelation 21:8-9

In Revelation the trumpets are used for both purposes, because in order to successfully gather together for spiritual battles, we must also be gathered together as one in worship! This is how the Israelites won many of their battles. As an example, consider the worship that king Jehoshaphat set in order as they faced the enemy in battle:

“And when he had consulted with the people, he appointed singers unto the Lord, and that should praise the beauty of holiness, as they went out before the army, and to say, Praise the Lord; for his mercy endureth for ever.” ~ 2 Chronicles 20:21

There are many Old Testament scriptural accounts of trumpets being used to call the people together for worship, and as part of the worship:

The way we win our battles is with God’s presence with us, so it is only natural that the same trumpet used for worship should also be used as a call to battle. There are many examples of this also in the Bible:

“And Moses sent them to the war, a thousand of every tribe, them and Phinehas the son of Eleazar the priest, to the war, with the holy instruments, and the trumpets to blow in his hand.” ~ Numbers 31:6

Joshua was instructed of the Lord in a very specific and orderly manner in how to use trumpets in the battle against Jericho (read Joshua chapter 6).

Gideon used a trumpet to gather the people, and his 300 chosen men used trumpets and lamps to defeat the huge army of Midian. (Read Judges chapters 6 – 8.)

But the sound of the true gospel trumpet must be clear and in agreement with both the Word of God and the Spirit of God: or else it will only produce confusion!

“For if the trumpet give an uncertain sound, who shall prepare himself to the battle?” ~ 1 Corinthians 14:8

The clear sound of the gospel trumpet will gather the true and faithful together to live as holy saints, and to worship in Spirit and in truth.

“Unto the church of God which is at Corinth, to them that are sanctified in Christ Jesus, called to be saints, with all that in every place call upon the name of Jesus Christ our Lord, both theirs and ours:” ~ 1 Corinthians 1:2

Have you answered the call of the trumpets of God? Today God still has a true ministry. They may be few and hard to find, but again they need to humbly prepare themselves at one altar of sacrifice and in true worship and unity, so that they may be anointed of God to sound the gospel trumpets with authority!

Will you continue with us, as the angel messenger preachers sound the trumpets of the Revelation of Jesus Christ message?

Note: this diagram below shows where this seventh seal message is within the full Revelation message. To better understand a high level view of Revelation, you can also see the “Roadmap of Revelation.” 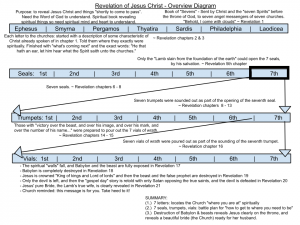