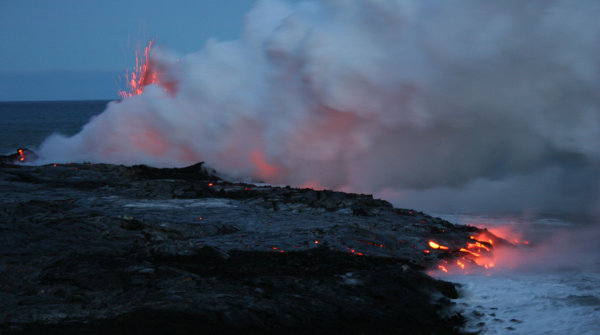 It is interesting how many times the scriptures refer to a type of judgement from God, that causes a seemingly immovable thing like a mountain to be moved and destroyed.

Mount Zion is spiritually described as a mountain that cannot be removed.

“They that trust in the Lord shall be as mount Zion, which cannot be removed, but abideth for ever. As the mountains are round about Jerusalem, so the Lord is round about his people from henceforth even for ever.” ~ Psalm 125:1-2

To the contrary, Babylon is described as a mountain that is judged, and removed.

But what happens when the spirit of Babylon moves in among those claiming spiritually to be Mount Zion? When a church-mountain that used to be a true people of God becomes corrupt, then they are no longer Mount Zion. Consequently they must be exposed and judged by the Word of God!

In the context of dealing with a tree that no longer bore fruit, Jesus taught that if one had faith, by the Word of God a whole spiritual mountain could be brought to nothing!

“For verily I say unto you, That whosoever shall say unto this mountain, Be thou removed, and be thou cast into the sea; and shall not doubt in his heart, but shall believe that those things which he saith shall come to pass; he shall have whatsoever he saith.” ~ Mark 11:23

Certainly in Jesus’ time on earth, the Jewish spiritual leaders had become this fallen spiritual mountain that also would be removed.

But also as time rolled into the 3rd and 4th century, there began to be a let down in the pureness of the gospel that church leaders preached. Many church leaders started to become more concerned about influence and control, rather than continuing as a humble servant.

Revelation identifies the second church age named “Smyrna” as a time when corruption began to find its way into the place of worship. This same type of spiritual falling away also happened in the Old Testament, and so the prophet Isaiah also described the need for judgement against spiritual mountains!

“The people of thy holiness have possessed it but a little while: our adversaries have trodden down thy sanctuary. We are thine: thou never barest rule over them; they were not called by thy name. Oh that thou wouldest rend the heavens, that thou wouldest come down, that the mountains might flow down at thy presence, As when the melting fire burneth, the fire causeth the waters to boil, to make thy name known to thine adversaries, that the nations may tremble at thy presence! When thou didst terrible things which we looked not for, thou camest down, the mountains flowed down at thy presence.” ~ Isaiah 63:18 – 64:3

The judgement was (and still is) preached by a gospel ministry, described as a trumpet angel. This ministry revealed that the people (waters) had become blood guilty. They revealed this by preaching under the direction of the two anointed witnesses: the Word of God and the Spirit of God, spoken of in Revelation chapter 11. And by this anointing, they showed that this seemingly on fire church leadership, was actually now guilty of the blood of many souls.

Why? Because they had allowed political agendas and the compromise of the pure gospel to move in. They no longer would preach the fullness of the gospel led by the Holy Spirit. In their desire to fulfill personal and political agendas, they would take the sword of the Spirit (the word of God) away from the Spirit’s control. And then they would use it under their own control, and for their own purpose (which is also described in Revelation in the opening of the second seal).

Taking the Word of God under a person’s own control always leads to a fallen ministry that becomes blood guilty. They become blood guilty because people spiritually die under a man-rule based gospel. And it also leads to others being persecuted for not following the man approved agenda.

Consequently, in the final judgments of Revelation on hypocrisy, the vials of God’s great wrath are poured out (meaning they are preached). And so when the second and third vials are poured out upon the waters, they are also turned to blood. This symbolically is showing that the fallen ministry, and those who follow them, are being exposed as being blood guilty for their persecution of the true faithful people of God.

The apostle Paul was very careful to keep the gospel under the control of the Holy Spirit, so that he would never become guilty of anyone’s blood.

“Wherefore I take you to record this day, that I am pure from the blood of all men. For I have not shunned to declare unto you all the counsel of God. Take heed therefore unto yourselves, and to all the flock, over the which the Holy Ghost hath made you overseers, to feed the church of God, which he hath purchased with his own blood. For I know this, that after my departing shall grievous wolves enter in among you, not sparing the flock. Also of your own selves shall men arise, speaking perverse things, to draw away disciples after them. Therefore watch, and remember, that by the space of three years I ceased not to warn every one night and day with tears.” (Acts 20:26-31)

Note that God has always judged every spiritual mountain that has ever opposed his true people. In Revelation spiritual Babylon is that mountain that is judged, just as she was judged in the Old Testament when Jeremiah the prophet blew the gospel trumpet against her then.

“And I will render unto Babylon and to all the inhabitants of Chaldea all their evil that they have done in Zion in your sight, saith the Lord . Behold, I am against thee, O destroying mountain, saith the Lord , which destroyest all the earth: and I will stretch out mine hand upon thee, and roll thee down from the rocks, and will make thee a burnt mountain. And they shall not take of thee a stone for a corner, nor a stone for foundations; but thou shalt be desolate for ever, saith the Lord . Set ye up a standard in the land, blow the trumpet among the nations, prepare the nations against her, call together against her the kingdoms of Ararat, Minni, and Ashchenaz; appoint a captain against her; cause the horses to come up as the rough caterpillers.” ~ Jeremiah 51:24-27

The same judgments that bring down backslidden spiritual mountains, do not need to scare the true people of God. Because their hope is not in fallen churches, but rather in God!

“God is our refuge and strength, a very present help in trouble. Therefore will not we fear, though the earth be removed, and though the mountains be carried into the midst of the sea; Though the waters thereof roar and be troubled, though the mountains shake with the swelling thereof. Selah. There is a river, the streams whereof shall make glad the city of God, the holy place of the tabernacles of the most High. God is in the midst of her; she shall not be moved: God shall help her, and that right early.” ~ Psalm 46:1-5

Finally, we are told also that “…and the third part of the ships were destroyed.” Revelation 8:9

In ancient times, ships were the principal method of traveling to far lands, especially in commerce. Noting that a third of the ships were destroyed in a gospel context, shows that a third of those taking the gospel to foreign lands were shown to be spiritually sunk. The true gospel trumpet judged them to be destroyed, because of the political minded compromise of their form of gospel message.

We also have a literal example of this happening in the Old Testament when King Jehoshaphat made a political allegiance with the wicked King Ahaziah.

“And after this did Jehoshaphat king of Judah join himself with Ahaziah king of Israel, who did very wickedly: And he joined himself with him to make ships to go to Tarshish: and they made the ships in Ezion-geber. Then Eliezer the son of Dodavah of Mareshah prophesied against Jehoshaphat, saying, Because thou hast joined thyself with Ahaziah, the Lord hath broken thy works. And the ships were broken, that they were not able to go to Tarshish.” ~ 2 Chronicles 20:35-37

So today what has the second trumpet angel shown us personally? Have we mixed a political minded message with the gospel message? Are we afraid when the true gospel trumpet shows a familiar spiritual mountain (church) to be fallen?

Do we still find ourselves standing with the true church? The one that Jesus said could never be destroyed or moved. Where is your trust? In a man controlled church, or in God?

“They that trust in the Lord shall be as mount Zion, which cannot be removed, but abideth for ever.” ~ Psalm 125:1

Note: this diagram below shows where this second trumpet message is within the full Revelation message. To better understand a high level view of Revelation, you can also see the “Roadmap of Revelation.” 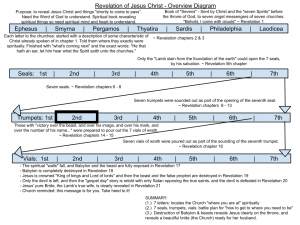