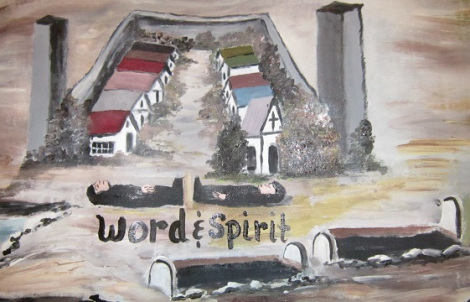 In the previous six verses of Revelation chapter 11, God’s two anointed witnesses: the Word of God and the Spirit of God, were introduced to us. In telling the historical story of the gospel day, we were shown that during the hierarchical rule of the Catholic Church, these two witnesses still witnessed (through true ministers), but they we’re grieved and saddened by the persecution that sincere Christians were receiving from the Catholic church.

But now, starting at verse seven from Revelation the 11th chapter, we are entering another period of time. A time where these two witnesses would be completely disrespected.

“And when they shall have finished their testimony, the beast that ascendeth out of the bottomless pit shall make war against them, and shall overcome them, and kill them.” ~ Revelation 11:7

This part of the scripture above is of particular interest.

“…the beast that ascendeth out of the bottomless pit.. “ 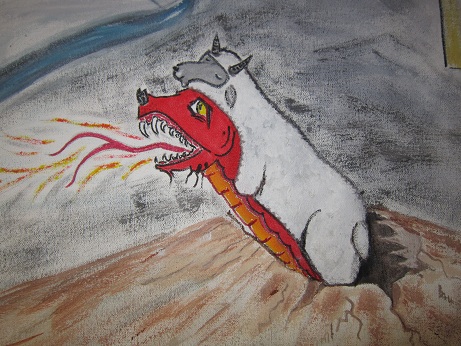 Here Revelation very specifically addresses a spiritual symbol as if it was already understood. Yet this particular symbol is not addressed in detail until later in Revelation. But if you pay attention to where this beast comes from (the bottomless pit), you realize that this spiritual condition has already been addressed, just in a different form. This is because the spiritual historical “story-line” in Revelation is retold many times, but from different spiritual perspectives.

This beast comes up out of the earth, from the bottomless pit: a place of no foundation. A hypocrite builds on top of the same bottomless pit. Because there is no end to how low their spiritual life can go as hatred, envy, lust, drunkenness, lying, etc. become part of the way they live.

This beast spirit is actually addressed at least four different times within Revelation:

1. The first form of this carnal beast is revealed in Revelation 9:1-11 as coming up out of the bottomless pit from the earth, in the form of a fallen ministry. They cause a smoke of confusion that darkens the truth of the gospel. This fallen ministry is likened to scorpions because they work to keep people under the painful scorpion sting of sin.

2. The second instance of this beast is noted here in Revelation 11:7-10 where the influence of the two witnesses, the Word and the Spirit, is killed in the lives of people who are influenced by a carnal beast like religion.

3. The third form is in Revelation 13:11 where the people are directed by this same beast from the earth, to worship the beast that came out of the sea. (Note: this is all symbolic, not literal.)

“And I beheld another beast coming up out of the earth; and he had two horns like a lamb, and he spake as a dragon. And he exerciseth all the power of the first beast before him, and causeth the earth and them which dwell therein to worship the first beast, whose deadly wound was healed.” ~ Revelation 13:11-12

Note: we will talk more about these beasts in later articles covering the 13th chapter of Revelation.

4. And the fourth and final form is in Revelation 20, where the beast form is fully exposed as coming directly from Satan himself, who is bound in his pagan dragon form into the pit, but then later released.

“And I saw an angel come down from heaven, having the key of the bottomless pit and a great chain in his hand. And he laid hold on the dragon, that old serpent, which is the Devil, and Satan, and bound him a thousand years, And cast him into the bottomless pit, and shut him up, and set a seal upon him, that he should deceive the nations no more, till the thousand years should be fulfilled: and after that he must be loosed a little season. ~ Revelation 20:1-3

So notice that God is exposing how deadly hypocrisy is when it is fully mixed with the pagan spirits of Satan. It has the ability to effectively kill the influence of the two witnesses: the Word of God and the Spirit of God.

How is this condition able to kill their influence? Because God will not stay around any people who choose to defile and profane his Word and Spirit! And when the grace of his divine favor departs, all that is left is the death of spiritual deception.

“And their dead bodies shall lie in the street of the great city, which spiritually is called Sodom and Egypt, where also our Lord was crucified.” ~ Revelation 11:8

The Revelation is truly trying to convey to us how terrible a time this is! First we are told the influence of the two anointed witnesses: the Word of God and the Spirit of God, has effectively been killed. And now the spiritual place of this death is described as being like Sodom and Egypt!

Sodom represents some of the lowest forms of wicked indulgence that people can go. And Egypt represents the place of wicked bondage that God had to mightily delivered the Israelites from.

And yet another revelation: we are told our Lord was crucified in Sodom and Egypt. But history clearly records that Jesus was crucified in Jerusalem. So we know that there is a spiritual comparison being drawn here, with serious implications for those who claim to serve God, but yet they disrespect the Word and the Holy Spirit! The Revelation is showing us how God looks upon those who disrespect Him! And he is describing them in some of the lowest terms available from the Bible.

In a previous article “Woe, Woe, Woe from the Three Trumpet Angel Messengers“, this second of the three woes (which includes Revelation 11:1-13) is revealed after the spiritual temple of God had been purged and cleaned by the judgments of the “first woe”. So now after the temple had been cleaned by the first woe, the spiritual city is being purged hypocritical people via the judgments of this “second woe”.

Remember that Jerusalem was a place where people gathered to worship God. It was a place revered as holy and good. But they rejected the Lord and crucified him. And later God would allow Jerusalem to be destroyed in the most awful way! Why! Because it does not matter how much you carry your Bible around and claim to love God. If you don’t obey the Word and the Holy Spirit, he views you as he did Sodom and Egypt. For God sees what is on the inside, not the outside.

And yet further, we are shown an even greater disrespect!

And to make matters worse, they even lack enough respect to give them a burial. This is the ultimate act of disrespect in Jewish culture.

“O God, the heathen are come into thine inheritance; thy holy temple have they defiled; they have laid Jerusalem on heaps. The dead bodies of thy servants have they given to be meat unto the fowls of the heaven, the flesh of thy saints unto the beasts of the earth. Their blood have they shed like water round about Jerusalem; and there was none to bury them. We are become a reproach to our neighbours, a scorn and derision to them that are round about us.” ~ Psalm 79:1-4

It is one thing to kill, but then to also not bury the dead; that is the ultimate in disrespect!

It is one thing to backside from serving God. But it is much worse to have sin in your heart and life and continue to pretend the Word and Spirit are working in your life. You are effectively trampling them as dead under your feet in the open street, before the whole world!

You can’t claim to be a Christian, and then continue to put the Word and the Spirit to an open shame “in the streets”. Severe judgement is awaiting you if you continue that way!

The scripture states that they would be dead three days and a half. This is spiritual language representing a much longer period of time. This time happens after the 1,260 years where the Word and Spirit prophesied in sorrow. So the  beginning of the “three and half days” started with the beginning of the Protestant age, and continued during this time.

Back in what is known as the Reformation Age, when Protestant sects began to form, there were still many sincere Christians at this same time. And as time went on, the Bible became broadly available to a larger audience of the common people. But many Protestant sects quickly began to form with their own man made leadership hierarchies. And these leaders would add doctrines to their movements to distinguish their identity from one another.

Unlike the Catholic church which kept most of the Word hidden to the people, the Protestant churches did this openly with the people having full access to the Bible. They put the two witnesses (the Word and the Spirit) to an open shame, and killed their influence completely within their sect organizations.

So the beginning of this Protestant age started during the Thyatira church age when the spirit of Jezebel sought to kill the influence of God’s prophets. And the end of this time correlates with the Sardis church age where all spiritual life was almost completely killed in the church.

So during this spiritual three and half day period, most people are glad to keep dead the effect of the two witnesses. They don’t want to feel any accountability to either one of them. Therefore they flock to false ministers that will tell them otherwise. And they actually rejoice that they are free from the effects of the Word and the Spirit.

“And they that dwell upon the earth shall rejoice over them, and make merry, and shall send gifts one to another; because these two prophets tormented them that dwelt on the earth.” ~ Revelation 11:10

The gifts they send are the special recognitions they give to others who help them to rejoice in their disobedience to the Word and the Spirit. They give titles and positions of authority like: reverend, pastor, bishop, professor, evangelist, etc. They make claims that they have spiritual gifts given from God. But the reality is their gifts are given from man.

Note: God does call the ones he chooses to be a: pastor, bishop, evangelist, etc. But if you help people to continue in sin and to ignore the Word and the Spirit, you only have a title that some person or organization gave you. In that state, God wants nothing to do with your religious efforts, nor with you! You must repent of all your religion and ask the Lord to forgive and save you from all your sins if you want a true hope in Christ. You also must come out of Babylon (which represents false Christianity). You must quit seeking for the gifts of titles from man. You must be content and humble to let God do the calling. And let him assign gifts according to the need.

So watch out! As we continue to read further in Revelation, we will see the Word and the Spirit be resurrected with power and authority!