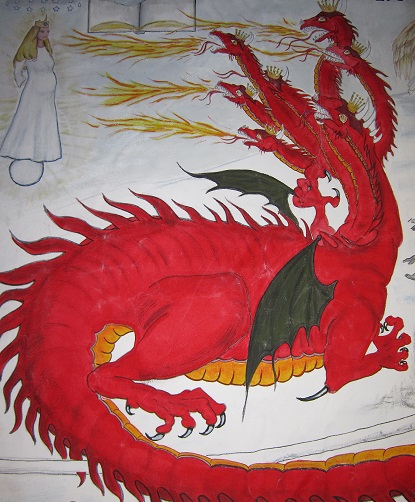 (From Revelation the 12th chapter)

The final trumpet of Revelation exposes the battles the church has faced, and will face, with the beast-like kingdoms of men. It is important to point out that God has often used trumpets as the means of waking up people to the spiritual battles they must face and fight.

There was another battle in the Old Testament that was also fought with trumpets. In the battle of the Israelites against Jericho, prior to walls of the city falling, the seventh and final trumpet sounded: and it was a very long one!

“And it shall come to pass, that when they make a long blast with the ram’s horn, and when ye hear the sound of the trumpet, all the people shall shout with a great shout; and the wall of the city shall fall down flat, and the people shall ascend up every man straight before him.” ~ Joshua 6:5

In the scriptures right before Revelation chapter 12 (Revelation 11:15-19) we see the beginning of the long sounding of the last of the seven trumpets. This final gospel trumpet is sounded by a unified ministry, who are gathered together to loudly declare that there is only one kingdom allowed: God’s! Consequently, God reveals himself mightily among his people, and takes to himself his great power to judge and destroy all hypocrisy.

This also happened in another place in the Old Testament when God manifested his great power and judgement at Mount Sinai. He did this also by a long and loud sounding trumpet. So likewise in Revelation chapter 12, he is doing the same. Again, like at Mount Sinai, the Revelation is spiritually warning carnal man that their spiritual beast like natures, and beast like religious kingdoms, will not be allowed to touch God’s holy mountain.

“There shall not an hand touch it, but he shall surely be stoned, or shot through; whether it be beast or man, it shall not live: when the trumpet soundeth long, they shall come up to the mount…  …And it came to pass on the third day in the morning, that there were thunders and lightnings, and a thick cloud upon the mount, and the voice of the trumpet exceeding loud; so that all the people that was in the camp trembled…  …And when the voice of the trumpet sounded long, and waxed louder and louder, Moses spake, and God answered him by a voice.” ~ Exodus 19:13, 16, and 19

When God is present, he also reveals what people are really like. God knows those that are true, and those that are spiritually just carnal beasts. And so the first thing revealed by this long sounding trumpet: is the true bride of Christ.

“And there appeared a great wonder in heaven; a woman clothed with the sun, and the moon under her feet, and upon her head a crown of twelve stars:” ~ Revelation 12:1

This picture shows the church, the bride of Christ, as she originally started. In a previous post we showed what the symbols of the sun and the moon stand for.

The church stands on the Old Testament (moon symbol) and is clothed in the righteousness of the light of the New Testament (clothed in the sun). The crown of twelve stars represents the 12 apostles of the Lamb, for from the beginning of Revelations, and other places in scripture, the symbol of stars clearly represent the ministry who labor for the Lord. And in this case it is emphasizing the ministry whom Jesus appointed to establish the gospel message.

“And she being with child cried, travailing in birth, and pained to be delivered.” ~ Revelation 12:2

This scripture reflects how the soul is revived through the salvation of Christ. This is often accomplished after much prayer, fasting, gospel preaching, teaching, and after the ministry suffers persecution. Listen to the Apostle Paul use the same language to describe his burden for souls within one of his epistles.

“My little children, of whom I travail in birth again until Christ be formed in you” ~ Galatians 4:19

The prophet Isaiah used similar language in foretelling of the day of Pentecost, when their was a great revival because of the outpouring of the Holy Spirit.

But at the same time, the prophet alludes to how Satan resists this new birth through persecution. Shall God bring to the point of birth and not fully deliver? No! He will not allow persecution to stop his beloved bride, the church, from delivering new children.

This same pattern of persecution even happened in the Old Testament when a revival in the people would cause them to return to the Lord’s true worship. Satan would quickly oppose them at that time also. So they sought the Lord’s help to fully deliver.

“And they said unto him, Thus saith Hezekiah, This day is a day of trouble, and of rebuke, and blasphemy: for the children are come to the birth, and there is not strength to bring forth.” ~ 2 Kings 19:3 & Isaiah 37:3

But God intervened for their birth/delivery at that time.  And so here again, in Revelation 12, we are seeing the travail to deliver souls: and Satan is persecuting them.

“And she being with child cried, travailing in birth, and pained to be delivered. And there appeared another wonder in heaven; and behold a great red dragon, having seven heads and ten horns, and seven crowns upon his heads. And his tail drew the third part of the stars of heaven, and did cast them to the earth: and the dragon stood before the woman which was ready to be delivered, for to devour her child as soon as it was born.” ~ Revelation 12:2-4

So we see the devil, in the form of pagan Rome, ready to persecute and to destroy the church and her children: even as soon as they are born! Pagan Rome certainly was the most brutal foe of the church in the beginning of the gospel day.

So, in the same way, let us consider the attributes of this pagan red dragon of Revelation:

“…having seven heads and ten horns, and seven crowns upon his heads.” ~ Revelation 12:3

Heads represent the spiritual/intellectual leadership of a people. Even today we use the term “head” to describe the one in a lead role in a government agency, corporation, or a religion.

Horns represent the ones with power to do harm and wage war.

And note: the crowns on the dragon are on the heads. (In the next beast of Revelation 13, the crowns are on the horns.) Crowns are a symbol of sovereignty. The authority vested in the king to speak a command and have his order immediately followed.

The Roman kingdom was a mixture of many kingdoms, all under one head rule of the Roman government. The head of Rome had sovereign authority, hence the crowns are on the heads. The head of Rome, the Emperor, also eventually became the head religious leader with the title “Pontifex Maximus” (or the greatest of all religious leaders). Later, the Roman Catholic Pope would also carry the same religious title of Pontifex Maximus.

Why seven heads? Seven represents “completeness” in the scriptures in many places. In one sense it is showing us a complete picture of the workings of Satan through the collective political movements of men. Others have noted that it also represents the complete working of Satan through men in every church age of the gospel day (there are seven of those ages).

But the dragon beast is not just heads. It has a body also. This body includes all the unsaved who follow the leadership of the heads: so they operate together as one beast politic. People without God are described in scripture as beasts! So really, it is only natural and logical that people collectively, and without God’s divine nature in them, should also be described as a beast.

This Roman pagan dragon beast with seven heads, actually appears in different forms in other places in Revelation:

But for now, in Revelation 12, the dragon beast is experiencing its first full scale battle against the church that Jesus built. And the dragon (Satan) will not prevail, so it will later have to change its tactics and transform itself into something else later. Just as he had done before, inspiring other men to become false apostles.

“For such are false apostles, deceitful workers, transforming themselves into the apostles of Christ. And no marvel; for Satan himself is transformed into an angel of light.” ~ 2 Corinthians 11:13-14

And finally, let us consider the latter or “end effect” of this Satan dragon beast spirit. I am now specifically talking about his tail.

“And his tail drew the third part of the stars of heaven, and did cast them to the earth” ~ Revelation 12:4

We have already shown in this article, and many others, that stars represent the ministry. This scripture shows that later, Satan would cause many ministers to fall. Satan would bring them down to the level of earthly people, so that they would begin to corrupt the message by teaching lies mixed with the truth of the gospel. The prophets from long ago warned us of this happening. And truly it did happen when false preachers began to become prominent among those claiming to be Christian:

“The ancient and honourable, he is the head; and the prophet that teacheth lies, he is the tail. For the leaders of this people cause them to err; and they that are led of them are destroyed.” ~ Isaiah 9:15-16

So the question for us is, what spiritually are we transformed into?

“And be not conformed to this world: but be ye transformed by the renewing of your mind, that ye may prove what is that good, and acceptable, and perfect, will of God.” ~ Romans 12:2

“Therefore if any man be in Christ, he is a new creature: old things are passed away; behold, all things are become new.” ~ 2 Corinthians 5:17

Are you spiritually still a beast in your nature, or have you been transformed in your spirit to the holy divine nature, by the Holy Spirit?