Note: this diagram below shows where this seventh trumpet message is within the full Revelation message. This is the final trumpet warning and call of all true Christians to gather together as one to worship God, and to prepare for spiritual battle! To better understand a high level view of Revelation, you can also see the “Roadmap of Revelation.” 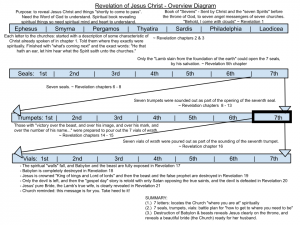 All the kingdoms of men, will no longer exercise control over the hearts of God’s faithful and true.

“And the seventh angel sounded; and there were great voices in heaven, saying, The kingdoms of this world are become the kingdoms of our Lord, and of his Christ; and he shall reign for ever and ever. And the four and twenty elders, which sat before God on their seats, fell upon their faces, and worshiped God, Saying, We give thee thanks, O Lord God Almighty, which art, and wast, and art to come; because thou hast taken to thee thy great power, and hast reigned.” ~ Revelation 11:15-17

The first warning is against the earthly beast kingdoms of mankind. Then the exposure of these kingdoms is accomplished next in chapters 12 through 13.

The second warning, reflected in chapters 14 through 15, instructs God’s people to gather together as one in worship. This is so that they might be prepared to pour out final judgement upon sin and religious hypocrisy. This final gospel judgment is accomplished through the pouring out of the vials of God’s wrath in the 16th chapter of Revelation. And the results of pouring out the vials, is reflected further in chapters 17 through 20.

The end result of all of this is that there will only be one kingdom which will be left standing: and that is the Kingdom of God. And that is why at the beginning of the sounding of the seventh trumpet, all the saved are declaring:

“And the seventh angel sounded; and there were great voices in heaven, saying, The kingdoms of this world are become the kingdoms of our Lord, and of his Christ; and he shall reign for ever and ever.” ~ Revelation 11:15

In every age of time throughout history, regardless of how many beast kingdoms mankind created through governments and religious organizations: Jesus Christ still had his remnant of people that were faithful and true. And the same is still true today.

So every one of us needs to figure out which kingdom we identify with. Are we part of the one true and faithful church of the living God? Or are we part of some man ruled Church or other earthly religion?

So the seventh trumpet message represents the final message of Revelation. And this is why prior, in chapter 10 of Revelation, that the mighty Revelation Angel, Jesus Christ, tells us:

“But in the days of the voice of the seventh angel, when he shall begin to sound, the mystery of God should be finished, as he hath declared to his servants the prophets.” ~ Revelation 10:7

The mystery of God has been fully revealed. All the religions of mankind, including those that call themselves a Christian church, are just another fleshly beast kingdom. The true kingdom of God is still ruled by Jesus Christ.

Jesus’ Kingdom is an everlasting Kingdom. And it began through the death and resurrection of Jesus Christ. This has always been the way that scripture has described it, even going back to the prophecies in the Old Testament.

“I saw in the night visions, and, behold, one like the Son of man came with the clouds of heaven, and came to the Ancient of days, and they brought him near before him. And there was given him dominion, and glory, and a kingdom, that all people, nations, and languages, should serve him: his dominion is an everlasting dominion, which shall not pass away, and his kingdom that which shall not be destroyed.” ~ Daniel 7:13-14