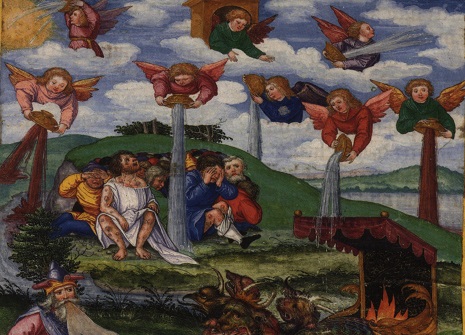 The final judgments, poured out by the preaching of a true ministry, are described in detail within the final chapters of Revelation, starting with chapter 16. But this ministry has a final preparation to do before this final calling to preach. So in Revelation chapter 15 we first start with the identification of this ministry.

“And I saw another sign in heaven, great and marvelous, seven angels having the seven last plagues; for in them is filled up the wrath of God.” ~ Revelation 15:1

In the three preceding chapters to this scripture above, the kingdoms and marks of the beast were exposed. These kingdoms are shown to be nothing more than carnal systems of so-called Christian religions, generally recognized as Catholicism and divided Protestant sects.

Because these systems have now been exposed for what they are, the true saints were shown in Revelation chapter 14 to have been set free from the deception of this beast form of false Christianity. And now that they are free, God has determined to use them to pour out the plague judgements of Revelation against the hypocrisy of fake, beast-like Christianity.

Do the plague angels of Revelation come from heaven?

A “plague” here means a blow or a wound. A public affliction or calamity. It is a judgement event that is witnessed by everyone.

The word angel here means messenger in the original Greek. And specifically in Revelation, angels are often identified as human messengers, or preachers.

They are preachers full of the fire of the Holy Spirit in the message they deliver.

“Who maketh his angels spirits; his ministers a flaming fire” ~ Psalm 104:4

They are true ministers that are faithfully obedient to the Lord and his Word.

“The LORD hath prepared his throne in the heavens; and his kingdom ruleth over all. Bless the LORD, ye his angels, that excel in strength, that do his commandments, hearkening unto the voice of his word. Bless ye the LORD, all ye his hosts; ye ministers of his, that do his pleasure.” ~ Psalms 103:19-21

Specifically in the book of Revelation they are identified as men.

“And he measured the wall thereof, an hundred and forty and four cubits, according to the measure of a man, that is, of the angel.” ~ Revelation 21:17

Preachers whose message from God is so profound, that even an Apostle would be moved towards glorifying them. But a true preacher will not allow anyone to worship him. He will always tell people to only worship God!

“And I John saw these things, and heard them. And when I had heard and seen, I fell down to worship before the feet of the angel which shewed me these things. Then saith he unto me, See thou do it not: for I am thy fellowservant, and of thy brethren the prophets, and of them which keep the sayings of this book: worship God.” ~ Revelation 21:8-9

Now in Revelation chapter 15 we see seven messengers with seven plagues of God’s wrath: because the scriptures often use the number seven to show the “completeness” of something spiritual. So these final seven judgement messages complete the final preached judgements of the Lord. And in these preached judgements, the final mercy of the Lord is shown: warning everyone to repent of hypocrisy and all sin, before the final judgement!

Note: The warning message is divided into seven parts. And this division into seven happens four different times within Revelation: the last time being the seven plague angels. This seven-pattern also reflects the manner in which God promised he would correct the Old Testament Israelites in Leviticus 26:18-28. Four different times he said he would correct the Israelites seven times: if they forsook him.

In the next scriptures of Revelation chapter 15, we will see how a true ministry must prepare to be able to pour out the plagues of God’s wrath.